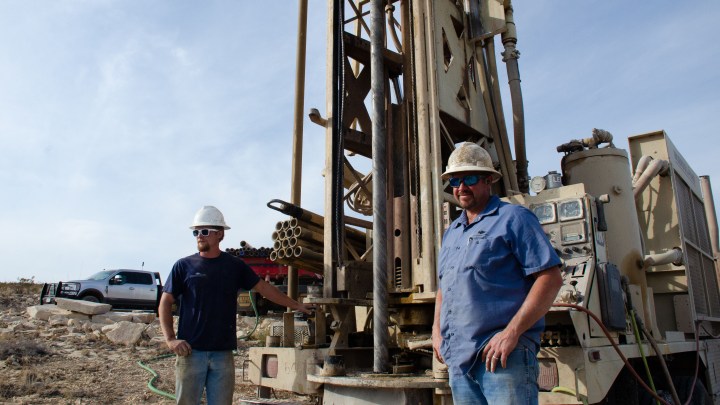 COPY
Lee Killingsworth and another driller operate the rig and look out onto the property. Zoe Kurland

Lee Killingsworth and another driller operate the rig and look out onto the property. Zoe Kurland
Listen Now

Out in the ghost town of Terlingua in remote West Texas, craggy mountains loom high in the distance, largely uninhabited save for a few houses dotting the hillside. But on a morning in late November, there was a change to this landscape, where a drilling rig cut into the horizon, spewing dark shale into the air.

As Kade Killingsworth, owner of Arrowhead Drilling, made his way up to the rig, he said that they would probably have to drill 1,000 feet to hit water — but even then, it’s not a sure thing.

“You just don’t know what to expect out here,” Killingsworth said. “Hopefully, we’ll find the water.”

Statewide, since the start of the pandemic, more people have been moving out to rural areas. And in far West Texas, where municipal water supplies aren’t readily available, the first thing newcomers have to do is drill a well.

In far West Texas, 81% of the water supply comes from groundwater, according to data from the Texas Water Development Board. Ranchers have been putting wells on their land for decades, but now large landowners are breaking up their property and selling smaller parcels off to newcomers. All of those new residents need water, too. But officials are concerned that there isn’t enough to go around.

Killingsworth, a third-generation well driller, does a lot of that work, but he said even if they find water, there are risks moving to West Texas.

“If I were to buy a piece of property, I myself would want to know whether that’s sustainable or not for me to drill a water well for me to live there,” Killingsworth said.

Lately, Arrowhead Drilling has been getting calls from many places. As more people drill wells in the desert, however, Killingsworth said there’s no way to know that the water will last.

“I’m not going to build a home out there if I know that there’s already too many wells on this place, and we’re not gonna be able to know if we have water in the future or not.”

“What’s happening is you’re getting a lot more wells in an area that we don’t necessarily want to see so many holes in the ground,” Webb said.

However, groundwater districts are continuing to issue permits; it’s the age-old issue of population growth in Texas versus shared resources, said Robert Mace, a hydrologist who studies rural groundwater use in the state and executive director and chief water policy officer at the Meadows Center for Water and the Environment.

“As people are buying property, they’re putting in wells, and there are more straws going into the aquifer,” Mace said. “That’s just going to add more stress to the aquifers.”

By straws, Mace means more water users, which doesn’t bode well for the region. Mace recently authored a report showing that far West Texas groundwater is currently being pumped to its limit. Wells are already going dry, he said, which means landowners have to make their wells deeper — a costly process — or drill a new well entirely.

“At some point, you do reach the bottom of the aquifer, and you may have to go to a deeper aquifer if one exists,” Mace said. “And there may not be one that exists, so at that point, you don’t have a water supply anymore.”

The state’s water laws weren’t written with the expectation that this many people would live in the desert, said Amy Hardberger, a water law professor at Texas Tech University. Texas land management was built on the assumption that ranchers with large properties would be good stewards of the land “because they do have this dependency on the land working,” Hardberger said.

To address the issue, some groundwater districts are trying to pass rules to limit the number of wells allowed on small pieces of land. However, regulations can only do so much.

Hardberger said that the region is in the midst of a huge culture shift, and local officials need to send new residents a clear message: “We cannot — not we will not — we cannot change our ethos to meet what you were used to in a much more lush area, or none of us will be able to remain here.”