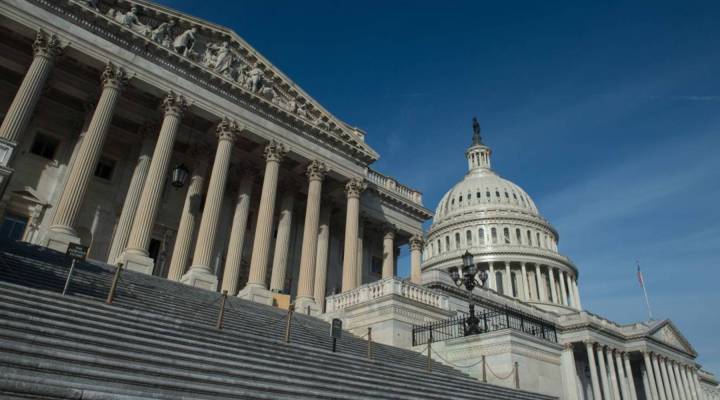 COPY
What are some potential obstacles that await Democrats as they prepare to implement the Inflation Reduction Act? Nicholas Kamim/AFP/Getty Images

What are some potential obstacles that await Democrats as they prepare to implement the Inflation Reduction Act? Nicholas Kamim/AFP/Getty Images
Listen Now

President Joe Biden and Democrats in Congress are on the cusp of implementing some of their most ambitious agenda items. The Inflation Reduction Act means to, well, bring down inflation by targeting climate change and health care. Democrats have been working at this for months, and they would undoubtedly cheer the bill’s passage. But where do they go from here?

“Marketplace Morning Report’s” David Brancaccio spoke with Felicia Wong, president and CEO of the Roosevelt Institute, a liberal-leaning think tank, to hear what’s likely coming next. Below is an edited transcript of their conversation.

David Brancaccio: So it’s not just this huge package of legislation that’s been in the news in recent days. There’s more to what is regarded as a progressive agenda that has gotten into law.

Felicia Wong: Yeah, you know, surprising to many of us, including me, but we are seeing some sudden, Democratic legislative success. The big news recently, of course, is the Manchin-Schumer deal, that Inflation Reduction Act. So that act mostly focuses on a couple things: increasing corporate taxation and improving the tax system itself. That’s really important. It focuses on reining in runaway drug costs, it gives government the power to negotiate with the pharmaceutical industry over the cost of some drugs. And of course, the big news there is the climate deal: $370 billion in tax credits to make green energy cheaper.

But in addition to all of that, you know, a couple weeks ago, the president signed into law the CHIPS and Science Act, which moves $52 billion to semiconductor manufacturing in the United States, moves hundreds of billions of dollars more to basic science research. You have the bipartisan infrastructure legislation, which was over a trillion dollars for roads and bridges. You’ve still got money from that American Rescue Plan from earlier on in the Biden term. You know, that had moved almost $2 trillion into the economy earlier in the pandemic, and it really set the stage for the strong workers’ market, the strong labor market we’re seeing today. So that is a tremendous amount of policy success.

Brancaccio: All right, so you would celebrate, but I want to be the guy to come on and ask you — that’s actually a line attributed to the legendary investor John Templeton, apparently on his wedding day, if his life were a stock, he said he would sell it short, meaning it had peaked on that day. Maybe this weekend is the peak of everything that your progressive friends have ever asked for, and it can only be downhill from here, given uncertainties in the election to come.

Wong: Yeah, I think you’re right to ask that question for a couple of reasons. First of all, all of that policy success that I just laid out, isn’t actually as much as the Democrats had wanted to do. Right? Certainly, just on climate, even the scale of the problem and the number of vulnerable frontline communities who are going to need more federal help to make a just transition away from fossil fuels, even that alone suggests that this giant climate deal is only a first step. So you’re right to ask the question. Yeah, it’s transformative. But is this actually the end of the road when there’s more road that needs to be built?

A lot of things really were left out of that package of laws that I just described. The most painful for a lot of people, for a lot of women is the care economy, right? There had been this idea that the federal government was going to help to build a stronger child care system, a stronger paid leave system, home care for the elderly, but that is nowhere in any of this legislation. And that is a brutal reality. On climate policy, there’s a lot of carrots here, a lot of, you know, money to encourage a transition off fossil fuels, but there’s no sticks. There’s no way to actually wean this nation and this planet off of oil and gas. And finally, I’d add that the tax policy wasn’t enough. You know, the fact that the carried interest loophole, which lets Wall Street hedge fund managers pay just a fraction of what you and I pay on their income, like, the fact that that’s not in the law is just inexcusable. So a lot more needs to be done. And it’s gonna be a really brutal road forward, especially if you suggest if, you know, after the fall, Democrats lose one or both houses of Congress.

Brancaccio: Right. And you know, if you followed big legislation before, which is what you do, and I’ve been stuck in that role from time to time, you pass a law, but then there’s an entire other question about how actually the law is carried out. So perhaps work to do in that area.

Wong: Right. So I think there are a couple things that need to happen to make sure or to try to give it the best shot that this is the beginning and not the end of what needs to be done. As you said, one of the most important things here is to actually implement this law. Just think about it, right. The executive branch is going to need to take this existing legislation and make sure that it benefits the American people across this entire very diverse, very divergent, very troubled nation. So the question is: What’s it going to take to make sure that urban people, rural people, Black people, Latinx, Indigenous, white, what’s it going to take to make sure that all people really see this benefit?

And then the second thing I would say is that the Biden administration or the Democrats actually have to tell a story of economic success. So yes, they’ve got to do all this hiring and all of this implementation to make sure that the money gets out to the American people. And then they have to actually explain that to the American people. And I gotta say, the Democrats don’t have a great track record on storytelling. You know, everything that I just talked about isn’t just a laundry list of accomplishments, even though that’s a lot of times how people do talk about it. This is really an all-out effort to make the American economy work better, to make it higher care and lower carbon, and to make it work that way for people who have really felt and actually been dealt out of the deal up until now.

But I’m really worried that telling that story to an American public that flat out does not trust government is going to be a tall order. So yeah, on the one hand, this is a transformational moment. And on the other hand, it’s going to take a lot of work to make all of these laws live up to their promise.