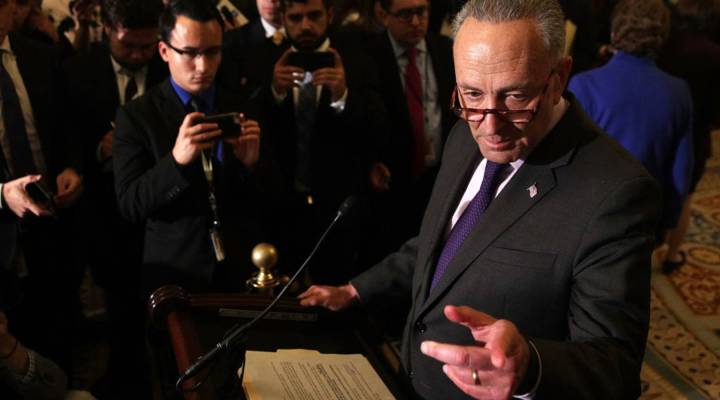 As we approach the Trump administration’s one-year anniversary, we’re looking more broadly at the economic agenda ahead.

With the Republicans in power, and the passage of their major $1.5 trillion tax overhaul, what are Democrats planning? Felicia Wong, president and CEO of the progressive leaning think tank the Roosevelt Institute, stopped by to give us some insight. Below is an edited transcript.

David Brancaccio: The Republicans think they nailed it. They got their tax overhaul — not very popular. And we have been parsing its pluses and minuses for weeks here. But you talk to a lot of prominent Democrats. What do they got for the new year?

Felicia Wong: I think that Democrats are really encroaching on the idea that what’s really hurting our economy is corporations that aren’t really healthy anymore. They’re hoarding rather than investing. And that’s a huge problem for Americans. That’s a huge problem for people who want jobs and economic security. The big question, David, is when are they going to get there and whether there’s going to be a coherent worldview behind those pieces of an agenda that will be lasting beyond any single election cycle?

Brancaccio: When companies try to sell you something they brand it and they come up with a succinct message for it. Do the Democrats have that yet? I mean, what did Chuck Schumer, the New York senator, use in the last year? Oh, he said, “a Better Deal.” Is that good enough?

Wong: I think what’s more important to talk about within the context of the “Better Deal” are the components of what Sen. Schumer and his fellow Democrats were really getting at. He talked about antitrust and the problems of corporations that had just gotten too big. You know, whether or not that has yet to be branded. That is a longer conversation to have.

Brancaccio: But also, I mean really, you have to connect something as abstract as anti-trust corporations are getting too big in that view with people’s lives. You have to make the next connection, which is, therefore you’re not getting paid as much as you should or something. Don’t they?

Wong: You definitely have to do that. I don’t think that’s the world’s easiest case to make. That’s why I go back to this question of worldview. But people do understand that overwhelming corporate power is something that they don’t really feel comfortable with, they don’t really want to live with, but in order for this to truly connect with the American voter, Democrats, politicians are going to have to connect this problem of corporate power to kitchen table issues. To jobs, to wages to people’s daily economic lives. This is actually a huge challenge. It will take time, but when Democrats are able to do that, that’s when they’re going to have that brand.