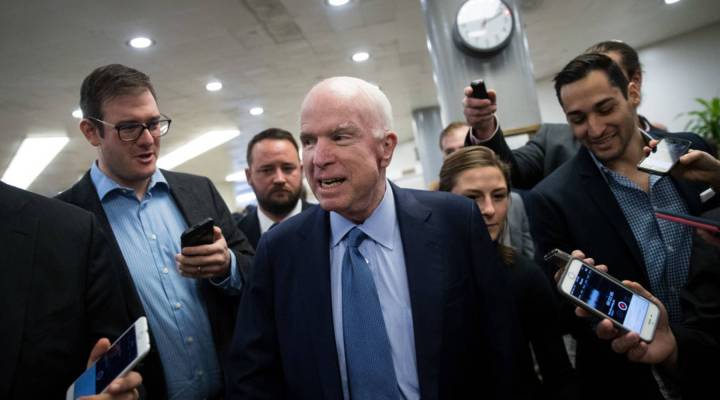 Sen. John McCain talked to reporters as he headed to vote on amendments to the 2018 fiscal year budget resolution, on Thursday, in Washington, D.C. Drew Angerer/Getty Images

Sen. John McCain talked to reporters as he headed to vote on amendments to the 2018 fiscal year budget resolution, on Thursday, in Washington, D.C. Drew Angerer/Getty Images

WASHINGTON (AP) — Republicans must now shift their focus to enacting President Donald Trump’s sweeping tax plan, a far heavier lift than the $4 trillion budget plan they’ve muscled through the Senate to lay the groundwork for the first tax overhaul in three decades.

The GOP on Thursday narrowly backed the budget plan, a prerequisite to major tax legislation. The Senate methodically worked through a pack of amendments, with Republicans rebuffing Democrats’ successive attempts to reshape the blueprint and derail the tax cuts in the Senate. The final vote was 51-49 with deficit hawk Sen. Rand Paul of Kentucky the lone opposing GOP vote.

Republicans will have a far harder time approving a complex plan to bring steep tax cuts, especially for corporations, and overhaul the nation’s tax system, which has sharply divided House Republicans on regional fault lines.

Trump, who made revamping the tax system a campaign pledge, told reporters Thursday that the budget “will be phase one of our massive tax cuts and reform.”

In a post-midnight Twitter post, he hailed the vote as “Great news,” saying that it is a “first step toward delivering MASSIVE tax cuts for the American people.”

Enacting a tax overhaul by year’s end is a prime goal of Trump and the Republicans, who are looking for accomplishments following an embarrassing drought of legislative achievements and the collapse of several Obamacare repeal attempts. Republican lawmakers publicly admit that failure on taxes would be politically devastating with control of the House and Senate at stake in next year’s midterm elections.

“It would be a complete disaster,” Sen. Lindsey Graham, R-S.C., said after the final budget vote.

The budget blueprint, using Congress’ twisty rules, greases the wheels for the tax package by enabling the Senate Republicans to catapult it through without fear of a filibuster — a delaying tactic meant to kill legislation — by Democrats.

But the Republicans are split. A restive rump of House Republicans from high-tax states like New York, New Jersey, Illinois and California staunchly oppose the tax plan’s proposed elimination of the federal deduction for state and local taxes. They maintain it would hurt low- to mid-income taxpayers and subject them to being taxed twice.

Their vocal opposition has led Republican leaders in Congress like House Speaker Paul Ryan and Rep. Kevin Brady, R-Texas, who heads the tax-writing Ways and Means Committee, to hear out the fractious GOP members and seek a compromise with them.

At the same time, the White House is making overtures to conservative Democrats in the House and Democratic senators from states that Trump won in the 2016 election. Most heavily courted have been Sens. Claire McCaskill of Missouri, Joe Manchin of West Virginia and Heidi Heitkamp of North Dakota — the trio dined this week at the home of daughter Ivanka Trump and her husband, Jared Kushner, both top advisers to Trump.

“There are plenty of Democrats who would probably benefit from helping President Trump on tax cuts if they help working people,” said Graham. He said he plans to propose an increase in the minimum wage as part of the legislation, something that could appeal to Democratic lawmakers.

But Manchin said after Thursday’s vote, “I fear that passage of this budget today will make it difficult to pass bipartisan tax reform in the coming weeks.” In his conversations with Trump, Manchin said, “we have discussed our shared goal of ensuring any tax-reform package passes with both Republican and Democratic votes, and focuses on providing tax relief for working Americans. The current tax-reform proposal … does not reflect my conversations with the president.”

The Democrats were excluded from the drafting of the tax blueprint, and they continue to demand that any tax-cutting plan not add to the mounting $20 trillion national debt. The newly-adopted Senate budget plan provides for $1.5 trillion over 10 years in debt-financed tax cuts, busting earlier Republican pledges of strict fiscal discipline.

The money would be used for the tax plan’s cut in the corporate tax rate from 36 percent to 20 percent, reduced taxes for most individuals, and the repeal of inheritance taxes on multimillion-dollar estates. The standard deduction would be doubled, to $12,000 for individuals and $24,000 for families, the number of tax brackets would shrink from seven to three, and the child tax credit would be increased.

Trump and the Republicans pitch the plan as a boon to the middle class and a spark to economic growth and jobs. Democrats charge it mainly would benefit wealthy individuals — like Trump — and big corporations.

The bare-bones plan is still evolving with lawmakers left to fill in the details. There are too many gaps, such as the income levels that would correspond with each tax bracket, to know how the plan actually would affect individual taxpayers and families.

The Senate action on the budget Thursday followed House passage of its budget version last week. It calls for tax cuts that don’t add to the deficit and would pair the tax rewrite measure with $200 billion in spending cuts over the coming decade. Both plans seek to crack open a longstanding ban on oil and gas exploration in the pristine Arctic National Wildlife Refuge.

Under congressional rules, the nonbinding budget resolution is supposed to lay out a long-term fiscal framework for the government. This year’s measure calls for $473 billion in cuts from Medicare over 10 years and more than $1 trillion from Medicaid. All told, Senate Republicans would cut spending by more than $5 trillion over a decade, though they don’t attempt to spell out where the cuts would come from.

In reality, Republicans aren’t serious about implementing the measure’s politically toxic proposals to cut Medicare, food and farm programs, housing subsidies, and transportation. In fact, lawmakers on both sides are pressing to break open the measure’s tight spending “caps” on the Pentagon and domestic agency operations and pass tens of billions of dollars more in hurricane relief in coming days and weeks.