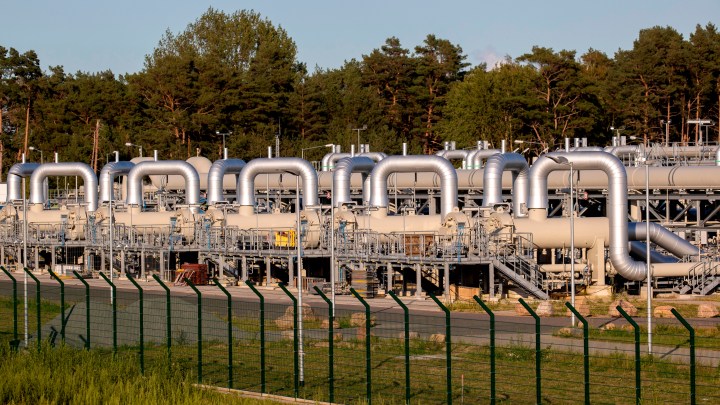 In Nuremberg, they’ve stopped illuminating historic buildings at night. In Potsdam, they’ve turned down the temperature in the municipal saunas. And from his office in Berlin, the economy minister has urged people across the country to take fewer showers. As Germany scrambles to conserve energy for fear that Russian President Vladimir Putin will cut off all natural gas flows to Europe this winter, many Germans now regret succumbing to the fatal allure of Russian supplies.

“They offered very cheap gas prices, and that was very attractive. And this is why we’re in this mess,” said professor Claudia Kemfert, head of the department of energy, transportation and environment at DIW, the German Institute of Economic Research.

Kemfert, along with experts in the United States and a number of other countries, had for years warned of the danger of depending on Kremlin-controlled gas.

“But Germany did not listen. They did their own decisions, and that was wrong. What has happened was predictable. I have been predicting it for the past 15 years,” she said.

Before the invasion of Ukraine, Germany was receiving up to 55% of its natural gas from Russia. Though that figure has now been whittled down to around 30%, it’s still regarded as dangerously high because the Kremlin just cut supplies in half, and fears are growing that further cuts will follow.

Kemfert is not the only one beating up Germany for getting hooked on Russian energy. Mike Taylor of the Oxford Analytica consulting firm told Marketplace that hackles have been rising across the European Union.

Poland and a number of other East European nations have long objected to Germany connecting itself umbilically to Russia with the Nord Stream gas pipeline system, which runs under the Baltic Sea directly to the north German coast.

“The Poles have been saying to the Germans, ‘What on Earth possessed you to commit so much of your gas supply to Nord Stream?’” Taylor said.

Polish Deputy Foreign Minister Pawel Jablonski, speaking to the BBC, could not resist the temptation to say, “We told them so.”

“Some countries have been warning of this situation and have been much better prepared,” he said.

The Poles, for example, are building a pipeline that will start bringing in gas from Norway before the winter. Poland’s gas storage facilities are almost full, and the country’s liquefied natural gas terminal has received plentiful supplies by ship from the U.S. and Qatar — something Germany can’t do.

“Germany neglected the need to build LNG terminals. We advised them to do so,” Jablonski pointed out.

Germany is now rushing to set up some LNG facilities and fill its gas storage tanks, which are currently less than 70% full. To ease the pressure on supplies, Germany eagerly endorsed the plan by EU member states to voluntarily cut their gas consumption by 15%.

“We need European solidarity at this time, not only reducing the gas demand but also to share the gas which is available over wintertime in solidarity,” said DIW’s Claudia Kemfert.

But reserves of solidarity may be running low. Whether all EU members will be happy to share their gas in the depths of winter isn’t certain. Jablonski was clearly not sympathetic to Germany’s plight:

“Poland is always ready to help those in need, but we can only regret that the spirit of solidarity wasn’t there when decisions about Nord Stream 1 and Nord Stream 2 were being made and implemented,” he said.

There wasn’t much solidarity during the debt crisis a decade ago either. Germany lectured and even browbeat its heavily indebted Southern European partners, accusing them of gross irresponsibility. Now, Germany stands accused of something similar, Kemfert said.

“Now, we cannot lecture anybody. We need to get lectured,” she said, adding that there must be doubt about whether every EU member state would rally to Germany’s aid if it ran out of gas.

“There are some countries who are saying we don’t have solidarity with Germany anymore because they did not treat us well during other crises,” she said.

Among EU members, Germany is not the most dependent on Russian gas. Latvia, Austria, Bulgaria, Hungary, Greece and the Czech Republic have all been purchasing a larger percentage of their natural gas requirement from Russia. But as the bloc’s largest economy by far, Germany has been the EU’s biggest consumer of the fuel. The country’s main BASF chemical plant alone, for example, needs more gas than the whole of Greece, Denmark or Bulgaria.

So great is German industry’s reliance on Russian gas that Ole Hvalbye, an energy analyst with the SEB bank in Oslo, Norway, fears for German manufacturing if Putin turns off the tap.

“Some parts of the industry in Germany will totally close down,” Hvalbye said. “And that will spell trouble for the rest of the bloc. You get a recession in Germany, and then I fear you have an economic crisis which spreads out across the European Union.”

And it may be fear that unites the EU — rather than any genuine sense of solidarity — as energy insecurity darkens the anticipation of winter.

“I think EU unity will hold,” said Taylor of Oxford Analytica. “But I think it will be ragged. It’ll be rather like the euro debt crisis again.”