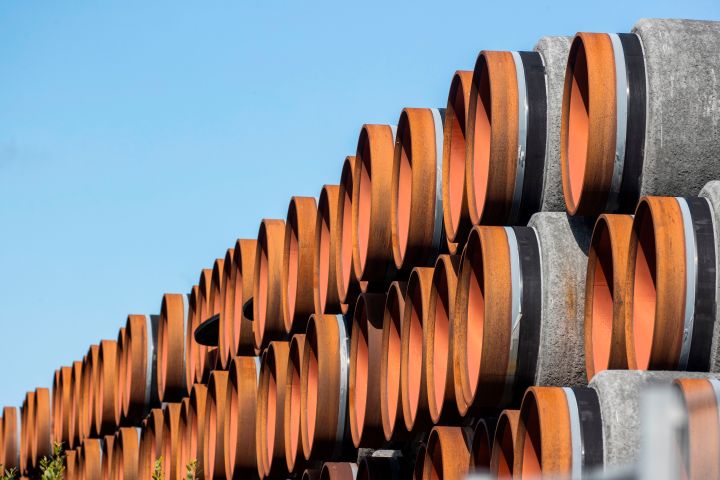 COPY
If Russia stops sending natural gas to Europe, it'll have to send it somewhere else. Odd Andersen/AFP via Getty Images

If Russia stops sending natural gas to Europe, it'll have to send it somewhere else. Odd Andersen/AFP via Getty Images
Listen Now

Margarita Balmaceda is a professor of diplomacy and international relations at Seton Hall University who has spent years studying the fine details of Russian pipelines and how the country uses its energy to assert global power. Her new book, remarkably timed, is called “Russian Energy Chains.” She spoke with “Marketplace Morning Report” host David Brancaccio, and the following is an edited version of their conversation.

David Brancaccio: Now before the war, you have detailed all the stakeholders — down the line from Russia through Ukraine to Western Europe — who would want, normally, to keep that gas flowing. But now, with full-on brutal war, is turning off the gas a more clear and present danger?

Margarita Balmaceda: Somebody like Putin loves the optics of closing the pipeline, closing the supply spigot — but in reality, natural gas doesn’t really work like that. You cannot really stop producing natural gas so quickly. And if you do not have somewhere to store natural gas that you have already produced, your only choice is either to let it flare in the air, or to continue shipping it.

Brancaccio: But if it didn’t go to Europe, why couldn’t [Russia] route its natural gas toward another willing customer? I mean, they’ve been building infrastructure, the Russians and the Chinese, to do just that.

Balmaceda: Well, that’s a very, very good question. But here, we need to understand geography, and we also need to understand what natural gas is. Natural gas is, obviously, a gas, and transporting this natural gas as liquefied natural gas to China is very difficult because of the location where this natural gas is produced. So we’re going to be having to talk about pipelines. And the reality is that pipelines to transport Russian natural gas to China are not really there to ship the amounts of natural gas we’re talking about. Currently, in the last few years, Russia has been exporting to Europe between 170 and 200 billion cubic meters. If you were to redirect this natural gas, you would need, first of all, the capacity to do that the pipelines. And even when Russia and China signed a very important agreement on natural gas supplies about 8 years ago in 2014, that pipeline, Power of Siberia, is currently only transiting about 10 billion cubic meters of gas. It’s supposed to have a much larger volume, about 35 billion cubic meters, but because of technical issues; because of problems with transportation in other areas of the Russian pipelines, it’s not working. Sure, there was a very big agreement signed between the Russian and the Chinese leaders, and there will be a new pipeline built —  the so-called Power of Siberia 2 — that will go through Mongolia. But that pipeline would only have about 30 billion cubic meters in capacity, and in any case, it wouldn’t be ready until 2030. We also need to remember that, currently, the natural gas that is sent to Europe is produced in Western Siberia, and the gas that is sold to China is produced elsewhere in Siberia, closer to China. And these two areas are not connected. So it will be difficult for Russia to redirect that natural gas.

Brancaccio: If the Russians couldn’t redirect the natural gas, if they turned off the spigot somehow to Western Europe, and they did flare it off, it would just be burning money — at a time that Russia, because of sanctions, really needs the money.

Balmaceda: Absolutely. So I think it is in Russia’s interest to continue selling as much natural gas as it can, within the reality that the European Union is going to be reducing imports. Because otherwise, it would not only be a huge environmental problem to be flaring all that gas into the atmosphere, but also it will deprive Russia of income that it wants and needs.

Brancaccio: And thinking about energy chains: A major calculation, by Russia and by Europe and by the United States, is trying to figure out just how much money consumers are prepared to pay for heating and other fuels.

Balmaceda: Absolutely. In my view, this is going to be a very, very key issue when we are talking about European Union policies. Let’s remember that the prices paid by consumers in Europe are, in general, much higher than the prices we pay here. And there needs to be a very clear consideration of what kind of measures may be taken to soften the blow for the consumer. Because if you have a political backlash like you had several years ago with the yellow vests in France and Germany, there might be political pressure to change policy vis-à-vis the limitation of imports from Russia — and that would be really terrible for Ukraine and also for decarbonization and for security in general.