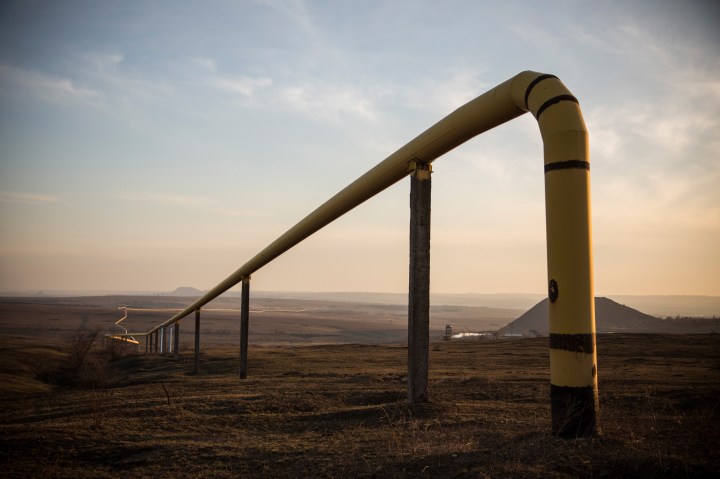 COPY
A natural gas line runs through the country side on March 11, 2015 outside Donetsk, Ukraine. Andrew Burton/Getty Images

A natural gas line runs through the country side on March 11, 2015 outside Donetsk, Ukraine. Andrew Burton/Getty Images
Listen Now

Crude oil reached $110 a barrel today. One year ago, it was $66. Russia is also a major producer of natural gas that keeps many a household warm in the winter, especially Germany. Europe did increase its storage of natural gas ahead of the Ukraine invasion, and spring is coming – but the challenges aren’t going away.

For more on this, Marketplace Morning Report’s David Brancaccio spoke with Vijay Vaitheeswaran, global energy and climate innovation editor at The Economist. The following is an edited transcript of their conversation.

David Brancaccio: You’ve been reviewing the situation given what has followed Russia’s invasion, and you find that Western Europe’s energy situation is a tough spot?

Vijay Vaitheeswaran: Yeah, being addicted to Russian gas is not a good place to be in. This is not the first time that we’ve seen this movie, either. Europe has relied on Russian gas throughout the Cold War, and since Putin has been in power he’s rattled his sabre a few times over Ukraine, even cutting off the gas very briefly. So Europe’s had previous warning shots, and they did not do enough to get off of Russian oil or reduce dependency.

Brancaccio: It’s my understanding that Europe has been able to add to its stockpiles in recent weeks, and that there may be acute problems this winter, but we also have to start thinking, at this point, about next winter and the years that follow.

Vaitheeswaran: You’re absolutely right. If you ask the question, “How big a deal is it if Russia cuts off all the natural gas?” that’s the real problem for Europe. Though they take a lot of oil as well, oil is a global market with fungible commodity — whereas gas comes by pipeline from Russia, and they’re quite reliant on it. Up to 40%, depending on the season, comes from Russia. And [Putin] might use it as a weapon, and cut it off. The good news is, in the very short term, they will survive this winter without granny freezing. That’s, in part, because spring is almost here. That’s the main reason, timing. But also there is enough gas now in storage, and they have had a wave of liquefied natural gas, or LNG, and so they’re able to get by. But that stores up a problem for next winter. And if they don’t refill their gas storage units, which are at very low levels, they’re going to have a terrible crunch next winter — including, possibly, some form of rationing might be needed, if Russia keeps the gas on an embargo for a year, let’s say, if this were a dire situation where they just cut off the gas and won’t supply it.

Brancaccio: On this issue of gas: How about importing more liquefied natural gas by boat? I mean, the U.S. has some, North Africa has some, the North Sea is not tapped out … I know production there isn’t what it was.

Vaitheeswaran: LNG is a big part of Europe’s response, but there are some footnotes to that. First of all, over the last six to nine months, Russia has actually already reduced its normal flows of gas quite a lot. They’ve been kind of squeezing Europe, trying to put the pressure on, and it’s LNG that has come to the rescue. That’s the reason the lights are staying on and homes are staying warm this winter, because of a massive surge. And that came because Europe paid through the nose. A lot of cargos have been diverted from China, Korea, Japan in the last six months just by market forces — even before we get into the Ukraine geopolitical problems — that was just an energy crunch, related to market forces. And now, on top of that, we’re getting the geopolitical crunch. And so then, how much additional LNG are you going to get in the next six to nine months when they need to restock their stores? Well, the U.S. has a lot of potential, but our export capacity is at 100%, we really can’t export anymore because of our terminals being full and committed to other countries under long-term contract, for example. And, similarly, there are other constraints that have to do with the regasification facilities that Europe has, that is, where the gas comes in. They’re in the wrong place, meaning much of it is on the west side. France, Spain has a huge amount of gas capacity. But guess what? They don’t have the interconnectors to take the gas over to Germany or Central Europe, which would be hit hardest by a Russian cutoff. And so they didn’t build enough reverse flow capability, the ways to get all of that gas from where it can land to where it needs to go, in a huge volume. So Europe’s got some work to do. LNG isn’t going to save the day completely. It’s going to help, but they’re going to have to look at several other options as well.

Brancaccio: Yeah, maybe something the European Union could think about. Now, does this dramatic reminder about Europe’s vulnerability to Russia hasten Europe’s move toward renewables? Or is this move toward renewables, somehow, does it get in the way of the energy independence from President Putin’s Russia that Europe is now thinking about?

Vaitheeswaran: Well, this is the big question. The European Commission is actually going to unveil a big policy. They were going to do it this week, but the war got in the way of that, and so it’s going to be strengthened. Your piece is what’s called a trilemma: They want to keep costs affordable for consumers. They’re very big on climate, as we know, the leading part of the world trying to deal with the climate with lots of green stuff, especially renewables. But the third leg of that trilemma, energy security, is where they got very complacent. So now they’re going to double down on making sure the lights stay on and trying to get off of Russian gas. That’s going to mean, for the green lobbies in Europe, who are very strong, and the green thinkers, let’s have a lot more renewables to get off a Russian gas. That’s their first reflex, that’s going to be a part of a lot of countries’ response. Here’s the dirty little secret, though: renewables don’t always work. We saw that last summer when the wind didn’t blow for weeks and there was a very low hydro in Northern Europe. And so they need what’s called firm power and backup power. And for that, believe it or not, there are several countries in Europe — France, among them, and the Netherlands — are thinking about a revival of nuclear power. And other countries. Germany, for example, is explicitly bringing back natural gas as a backup for a big rollout of the renewables that they want. And so we’re actually seeing a radical change in mindset among the very ideological parts of Europe that used to bet only on renewables saying, “We need to be a little bit more grown up about this. Until, let’s say, batteries and smart grid technologies get strong enough and scale enough, we’re going to need to use some of these other somewhat less popular forms of power that do provide backup.”

Brancaccio: Before the Russian invasion, Germany was going whole hog on turning off its last nuclear power plants. And it was unthinkable that they would move away from that, given what happened at the Fukushima plant in Japan some years ago. But this invasion of of Ukraine by Russia is changing people’s thinking very quickly — could that change?

Vaitheeswara: In Germany, I predict it will not. I and my colleagues have spoken to the nuclear operators. Even though the government is saying, “Well, we should keep all options on the table,” in reality, the German nuclear sector is dead. The operators have taken the cash from the government. They’ve laid off the workers. They’ve actually handed off the legal liability for the nuclear waste to the government — I can promise, they don’t want to get that back. And so the word on the ground from Germany is that nuclear is dead. It’s not going to come back. But, again, something like natural gas — which European environmentalists absolutely loathe, even though, generally speaking, burning natural gas is way better than burning coal, for example — they see it as an enemy of renewables. They’ve actually come on board with building a regasification terminal, an LNG gas facility, in Germany — which it doesn’t have yet. Shockingly, it’s been kind of free-riding on the back of facilities in other countries. They’re going to build a couple of them now, they’re going to build natural gas plants in Germany — which, again, as part of their explicit strategy for a green-minded government is a bit of a turnaround.

Brancaccio: You talked to an expert who used the “R” word. Maybe not today or tomorrow, but perhaps in a year, rationing in Europe, rationing energy. Like to industry or to actual households?

Vaitheeswaran: Yeah, this is right. I mean, listen, rationing happens in the marketplace. It happened already last winter, through high prices, right? When prices are very high, we self-ration by using less. That’s one way we do it. And we already had it last winter in Europe, with some heavy industries going offline. Aluminum smelters, for example. Either they couldn’t afford it, or they were encouraged by government to go offline, and people were laid off for a while, the government gave them compensation. We’ve had a bit of a taste of this. But if they lose a significant part of their gas in a country like Germany — over half their gas comes from Russia, and it’s not just Germany, there’s a bunch of European countries that have a lot of Russian gas — and [if] it all goes offline just like that, then the various options — running your coal plants a little more aggressively, getting LNG, of course, and other sorts of efficiency measures, all sorts of things, higher prices, leading to more efficiency — won’t be enough, is the thinking from some experts. And you’re going to have to maybe shut down probably industrial users first — the heavy consumers, maybe steel plants, maybe some other kinds of industries that use a lot of natural gas for high industrial heat. And that will be unpopular, but not nearly as unpopular as cutting off grandma in the middle of winter.