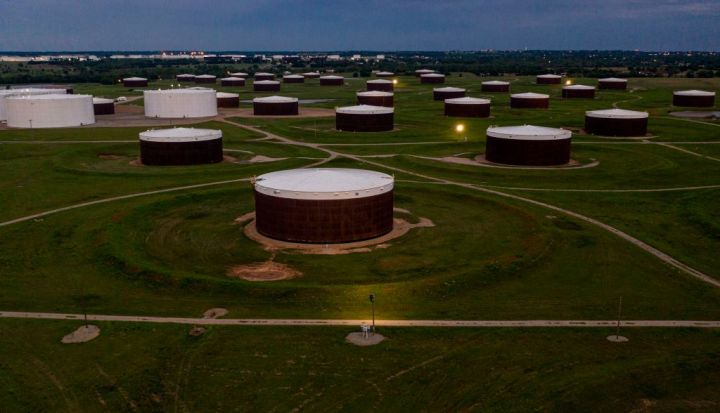 COPY
An aerial view of a crude oil storage facility is seen on May 5, 2020 in Cushing, Oklahoma. Rising demand for crude oil along with rising gas prices has led to an "energy shock" as the world attempts to transition to clean energy. Photo by JOHANNES EISELE/AFP via Getty Images

An aerial view of a crude oil storage facility is seen on May 5, 2020 in Cushing, Oklahoma. Rising demand for crude oil along with rising gas prices has led to an "energy shock" as the world attempts to transition to clean energy. Photo by JOHANNES EISELE/AFP via Getty Images
Listen Now

Analysts have warned that global energy shortages and fuel price hikes will likely hit and hurt the U.S. when demand for energy rises this winter.

It’s an energy shock that comes as the world continues to map out a way to transition from fossil fuels to clean energy sources, as well as a teachable moment; showing us how much more needs to be done to plan out a stable transition, according to Vijay Vaitheeswaran, global energy and climate innovation editor at The Economist.

“We do need to accelerate the energy transition,” Vaitheeswaran said in an interview with “Marketplace Morning Report” host David Brancaccio. “But we need to do it better.”

David Brancaccio: Prices for natural gas and crude oil are high, government forecasters in the U.S. are warning people their heating bills could double or more this winter. What do you make of this energy shock, as you call it?

Vijay Vaitheeswaran: Well, there’s two ways to look at this. The sort of long-term perspective is that hey, prices go up, prices go down, the best cure for high prices is high prices, right? So we’ll get a market response, we’ll have substitution, we’ll get additional investment and eventually this problem will solve itself. That’s true to some degree but what’s interesting here is this comes at a particular moment, when we’re also trying to grapple with the climate change problem. And therefore, this could be seen as the first great energy shock of the energy transition. And that’s something that’s worth unpacking.

Brancaccio: Right as the UN-sponsored meeting on climate change is going on in Scotland, some places in the world are stuck, shifting back to more carbon dioxide-producing fossil fuels. Some might be, I don’t know, tempted to say: ‘We tried to go green too quickly, look what happened.’ But you’re thinking the green investments maybe should have been bigger, faster, earlier, or something?

Vaitheeswaran: There’s two schools of thought and one is that, gosh, you know, we should have doubled down, we should have done much more on renewables than we did, and that’s why we’re in this crunch. The other argument is that, no, we went too fast; We didn’t invest enough in natural gas, for example, in Europe, where there’s a shortage at the moment — and Europe may very well run out of natural gas storage in the middle of a very cold winter to come. My view is that, in fact, we do need to accelerate the energy transition. But we need to do it better. For example, market structure. The way that natural gas markets were reformed in Europe made them utterly reliant on short-term and spot markets. Whereas previously, they had had long-term contracts and hedging, that was a better market design. And similarly, a shift to renewables, if you don’t also have energy storage and upgrades to the grid to deal with intermittency and other kinds of backup power. I think that, you know, there has to be a holistic approach to the energy transition, that hasn’t always been pursued.

Brancaccio: U.S., too, we have to work on buffers and stockpiles and do better planning for what happens when you get these crunches?

Vaitheeswaran: America is in a slightly better place. I mean, the same forces apply here. The more we start investing in upgrading our renewables capacity — and we’re likely to do that in coming years to deal with climate change and especially because renewables are quite cheap now, new renewable generation is cheaper than new coal, and will beat it in the marketplace, even without subsidy in most places in the U.S. — you begin to enter that intermittency problem. The best we can manage in terms of energy storage to compensate, batteries on the California grid can cover maybe four hours. We need days, maybe even between seasons, we need to have shifts in energy that’s not yet viable on a large scale. The difference with the U.S is that because we’re energy self-sufficient, we’re not reliant on, let’s say, Vladimir Putin’s Russia and Gazprom, as Europe is. So they’re in a precarious position as a net energy importer. The U.S. can manage its geopolitical risk with energy but we’re still going to have a lot of these problems as we saw in Texas, for example, during that winter storm when we saw terrible outages and lots of people suffering.

Brancaccio: With this energy shock in mind, what do you want to see out of this conference that goes on until the end of next week?

Vaitheeswaran: There a couple of things we need. First is, let’s be realistic. There’s way too much that’s being hung on this conference, this UN COP26, as it’s called, in terms of expectations, right? These events happen every year for the last 25 years. And so this is an important COP meeting as it’s called, summit, not the end of all of our efforts on climate. So let’s dampen our expectations. And the more realistic expectation is we want to see governments commit to meaningful action, that is put some meat on the bones of promises they made at the earlier Paris Conference six years ago. And we want to see credible national commitments in terms of how governments around the world are going to reduce fossil fuel usage, reduce their greenhouse gas emissions from agriculture and other sectors. So far, we’ve seen a lot of lofty and fairly toothless promises about net-zero commitments by 2060. For example, countries like Australia and Saudi Arabia have made these airy promises that probably don’t mean much. On the other hand, if you give me a roadmap on what you’re going to do by 2030, and what sectors are going to be involved and how you’re going to get there? Is there a carbon price, for example? What will the role of the utility sector be? Then I begin to take your promises more seriously.