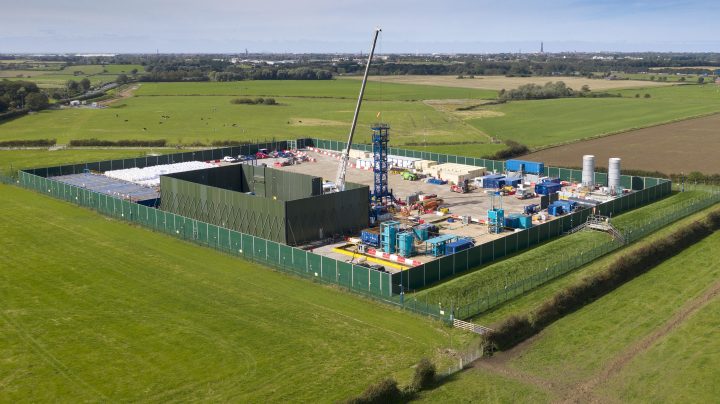 COPY
The United Kingdom shut down fracking for safety and environmental reasons in 2019; the wells were due to be filled with concrete as early as next week. Above, a Cuadrilla fracking site in Preston, England. Christopher Furlong/Getty Images

The United Kingdom shut down fracking for safety and environmental reasons in 2019; the wells were due to be filled with concrete as early as next week. Above, a Cuadrilla fracking site in Preston, England. Christopher Furlong/Getty Images
Listen Now

Fracking has been a pariah technology in the United Kingdom since 2019 when the country’s first two exploratory shale gas wells were shut down for environmental and safety reasons. The technology seemed to be dead and was about to be buried — the wells were due to be filled with concrete as early as next week. But now, as a result of Russia’s invasion of Ukraine, fracking could be reprieved. Continental Europe, which relies on Russia for up to 40% of its natural gas, is urgently seeking alternative sources. The British government now says it will review its decision to impose a moratorium on the controversial extraction technique.

Lawmaker Craig Mackinlay is leading the parliamentary campaign to lift the moratorium. He told Marketplace that for the Brits to ignore the vast reserves of shale gas under their feet never made any sense.

“This is total madness” Mackinlay said. “Just 10% of potential reserves would supply the U.K. with gas for a full 50 years.”

Exploiting this resource, he said, would mean that the U.K. would no longer need to import gas from continental Europe, and it could help reduce the continent’s energy reliance on the Kremlin.

“If this really did get off the ground, we could start supplying Europe to get itself out of its own energy mess,” he said.

Fracking was suspended in the United Kingdom two and half years ago, after it triggered a series of tremors, the worst of which was a 2.9 magnitude quake.

But that, according to Ernie Rutter, emeritus professor of geology at Manchester University, underlines the severe bureaucratic restrictions that have hampered the development of fracking in the U.K. A 2.9 magnitude tremor is minor, he said.

“Think of a heavy truck driving along the road, think of a train passing by. They’re very, very mild degrees of shaking. They don’t cause any damage,” he said.

It’s the sort of tremor, Rutter said, that has been caused when drilling for geothermal energy in other parts of the U.K.

“But then, people are prepared to accept larger tremors in connection with things they perceive as clean and green,” he said.

The fact that fracking produces a fossil fuel is one of the reasons that the technique is not popular in the U.K. and partly explains why its development has been so strictly regulated.

Critics of fracking maintain there are also other reasons to resist introducing it as a way of solving Europe’s immediate energy crisis.

“I really don’t think it’s a practical possibility,” said Mike Bradshaw, professor of global energy at Warwick University. “For one thing, the apparently vast shale reserves are still unproven and it would require up to 40 wells in different locations to arrive at a basic reserve estimate. That could take five or six years to complete.” Bradshaw does not believe that Britain’s nascent fracking industry is up to the task of reaching a level of production that would make a significant difference to the level of gas supply in the near future.

But pro-fracking lawmaker Mackinlay, who follows the industry closely and has had contact with American fracking companies, believes that Cuadrilla Resources, the company operating the two British wells, has been held back by what he called “very complex, lengthy and delaying regulations, unlike in the United States” and that without this straitjacket, the company could be pumping shale gas in about a year.

“We need to cut through and get on with the job. It’s important. And there’s a big geopolitical dimension to this,” Mackinlay said. “Europe is still transferring hundreds of millions of dollars on a daily basis to the Putin regime for the gas that it so desperately needs. That is a national and international scandal. We can do something about this.”

If fracking does resume in the U.K., it is likely to trigger a big wave of protest. The last government opinion survey on this subject indicated that only 17% of the population approved of the technique. The opposition stems not only from concerns about climate change and earthquakes, but also from worries about pollution and fears about the industrialization of the British countryside.

The U.K. government is due to publish an emergency energy review soon, and that should reveal whether or not it has decided to face down the critics, brave the resulting unpopularity and revive the fracking industry in the U.K. It will only do that if it believes that shale gas will help wean Europe off its dangerous addiction to Russian energy.