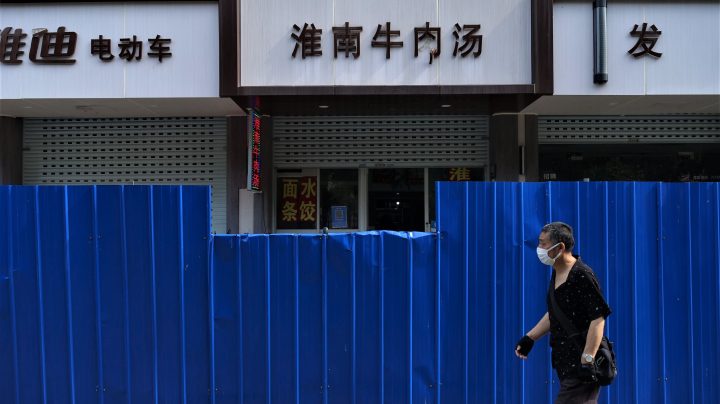 Chen Weiming, who owns a bath products company called Desire and Passion, was locked in his Shanghai apartment in early March — a month earlier than the rest of the city. The financial hub was dealing with the biggest surge in COVID-19 cases.

For 91 days, Chen’s routine consisted of exercise, regular COVID PCR tests and getting by on government food handouts. He also polished off 48 bottles of red wine, mostly from France.

Chen said the lockdown was not all bad for him personally, but professionally his company ground to a halt.

“Logistics stopped. We couldn’t send products to customers,” he said.

China will release its second-quarter gross domestic product figures Friday, and they are expected to show the impact of the two-month lockdown in Shanghai, the nation’s financial, transport and manufacturing hub.

The lockdown imposed in the early stages of the pandemic helped factories in China resume operations within months, and they were able to fulfill overseas orders. But the same playbook has been less effective against the more infectious omicron variant. In Shanghai, the COVID lockdown crippled the supply chain and logistics.

The restrictions forced Chen to do something bosses would normally be loath to do. He asked his clients — mostly golf courses in other parts of China — to buy from his competitors in the interim.

Shanghai’s citywide lockdown lasted through April and May; officials began easing restrictions in June. So far, only a third of Chen’s clients have returned.

Even before the Shanghai lockdown, a lot of companies felt squeezed.

These extra costs no doubt trickle down to the end consumers in Europe and the U.S. Manufacturers are also dealing with the rising costs of raw materials and cardboard packaging. Zhao said he finally raised his prices by 10% last year.

“But afterward, the euro depreciated against the Chinese yuan” because of the Ukraine war, he said. “So, our profit margin actually decreased.”

Perhaps restaurants have been hit the hardest. They are usually the first to close and the last to reopen during lockdowns.

Wang Ying runs a lamb hotpot restaurant. In May, he had been out of work for at least two months and was not in good spirits.

“I feel depressed. I cannot do business during the lockdown, and yet I still pay for all my workers. I’m losing money every day,” he said.

Public gatherings are not allowed, so Frank Tsai of China Crossroads — which organizes public lectures — has not had much revenue since Shanghai began its rolling lockdowns in March.

Plus, his girlfriend had a mental health emergency that required hospitalization. Getting to the hospital during lockdown was a challenge because most public transport had stopped.

“We had to wait three hours for an ambulance. There were no taxis to hospitals,” Tsai said.

At one point, they got on their bicycles, and, when they arrived at one of the best public mental health hospitals, they couldn’t get a bed.

“The staff there said, ‘In normal times you would get a bed because [my girlfriend] is obviously in a very bad condition. But not now because [there was] such a huge waiting list,’” Tsai recounted.

At public hospitals, the waiting lists were long during the lockdown.

Eventually, Tsai found a private, international hospital for his girlfriend. However, the treatment was far more expensive than in the public facility, and the results were not satisfying.

Most of Shanghai was allowed to return to work on June 1.

There was supposed to be relief for businesses, according to restaurant owner Wang.

“The government called for the rent to be reduced for six months, but the shopping mall we’re in only gave us a discount for one month,” he said. “And we still have to pay all the usual property management and marketing fees.”

No relief either for medical supplies manufacturer Zhao. And after a recalculation by the authorities, he has to pay more into his employees’ social security fund.

On top of that, just one COVID infection could send buildings back into lockdown across the city and trigger mass testing.

Zhao said success for him nowadays is not about profits — it’s about survival.