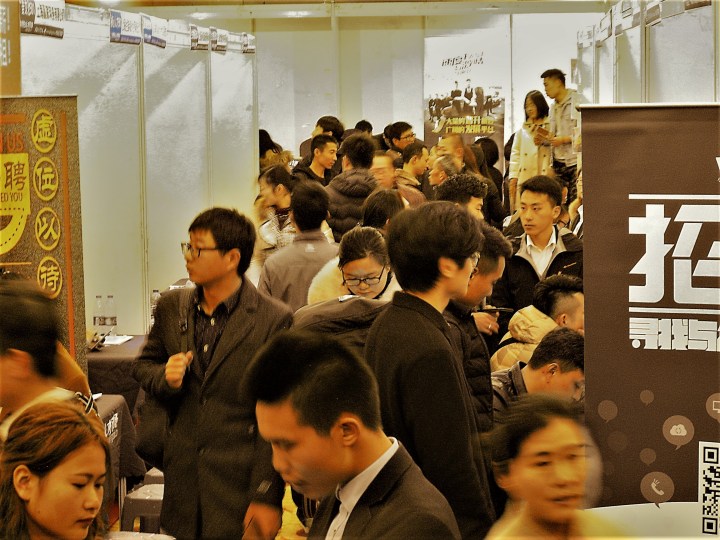 COPY
A busy Shanghai job fair in 2018. Since then, unemployment among 16- to 24-year-olds has steadily climbed, reaching 19.9% last month. Charles Zhang/Marketplace

A busy Shanghai job fair in 2018. Since then, unemployment among 16- to 24-year-olds has steadily climbed, reaching 19.9% last month. Charles Zhang/Marketplace
Listen Now

In late May, on day 53 of a crippling lockdown to contain the COVID-19 virus, Shanghai officials allowed some residents to leave their homes for a few hours — including chef Li Hongji.

Li and his friends brought beer and wine from home and drank them on the steps of a closed coffee shop across from Wukang Mansion, which is a tourist hot spot in Shanghai’s former French Concession.

Restrictions were starting to ease but not fast enough to save Li’s job. The Italian restaurant he worked at had closed.

“In April, we were only being paid minimum wage. I’m sure the restaurant could have survived the lockdown, but our boss, who is a foreigner, lost faith in Shanghai’s future,” Li said, adding that he did not receive severance pay.

China is increasingly sacrificing economic growth to retain its zero tolerance for COVID policy. Prevention measures and snap lockdowns, especially in the provinces of Shanghai and Jilin, lasted at least two months and dragged the country’s second-quarter gross domestic product growth down to just 0.4% on an annualized basis.

The official surveyed urban unemployment rate for July was 5.4%, while it was much worse, at 19.9%, for those ages 16 to 24 — the highest level since the government started publishing the statistic in 2018.

It was the second restaurant Li worked at that closed because of pandemic prevention measures.

“For chefs or anyone in the service industry, we have no plans for the future, or rather we cannot plan,” Li said. “We cannot even look for a job until the restaurants reopen.”

Shanghai’s restaurants mostly closed in late March and did not fully reopen for dine-in service until the end of June.

Further south, in the high-tech hub of Shenzhen, a software coder named Nathan is trying to keep his job. He would not give us his last name because his company has not formally announced its layoffs yet, though he says they had been happening in waves since January. In June, it was his department’s turn.

“Staff from human resources called an emergency meeting and started talking in vague terms that were impossible to understand,” Nathan says. “After 10 minutes of this, they made us sign a notice that said we had to reapply for our jobs.”

He says 22 of his team members had to compete for four jobs. Those who didn’t succeed basically had to leave.

Luckily, Nathan is still employed with the company — though he’s unsure for how long. He could find another job, but the tech sector has been laying off workers. Plus, at the age of 30, Nathan says he is considered too old for the tech industry.

“For my current salary, a company could hire two new college graduates or someone from a top university who has worked for big tech firms,” Nathan says.

This year, there are a record 10.8 million graduates in China — equivalent to the entire population of the state of Georgia — entering the workforce.

“Most companies didn’t respond,” said computer science graduate Han Jun. “The ones who did would say the positions required a few years of work experience, even though the job description said the position was open to new graduates.

“What the company posts in an ad and what they actually want are two different things,” he added.

When a company offered Han an internship in central China’s Wuhan city, he took up the offer.

“The company said it would train me, but all that meant was I would learn stuff online by myself. I left after a month. It was such a waste of time,” he said.

Han suspects he was being used since Wuhan’s government offers companies a subsidy for every new graduate they employ. His internship was unpaid, but he said the firm told him to lie if asked.

“There were people who came to inspect the company, and they asked if I had a salary and whether the firm was contributing to my social security insurance. I said it was. I should’ve admitted it wasn’t,” Han said. “I guess the firm got the government subsidy.”

Han could complain, but to whom? Chef Li also considered going to the labor bureau to get the severance package he is owed, but ultimately didn’t.

“Labor arbitration will take a long time … so I just let it go,” Li said. “The boss has his difficulties too.”

Most workers who faced questionable employer practices told Marketplace they would rather focus on getting a new job. The Chinese use the term “involution” to describe the hypercompetitive job market.

Involution “means everybody works overtime, and even if you’ve finished your tasks, you still can’t leave because the supervisor is watching you. If you leave early today, then you worry you’ll be given even more tasks tomorrow,” coder Nathan said.

It is no surprise then that Chinese language graduate Gan Yulin is trying to delay job hunting or at least avoid the uncertainties of the private sector.

“I am afraid of going into the workforce. I would rather stay at home and keep studying to take a postgraduate qualification or a civil service test,” the 22-year-old said. “That way, I can avoid job hunting and interviews.”

Gan is also thinking of joining the army.

Most of the people Marketplace interviewed for this story have found jobs.

Chef Li’s old employer managed to relaunch the restaurant, but by then Li had found a new cooking job at a facility for moms who had recently given birth. However, Li said he does not enjoy his work.

After the internship, graduate Han spent 10,000 yuan, or about $1,500, on a web development course to upgrade his skills. He is now a web developer in his hometown in central Hubei province earning 36,000 yuan ($5,300) annually, which is far less than what he expected.

Alexander Liu in northern China’s Hebei province could afford to wait for the right job because he saves a lot.

“For guys like me who have graduated from college for five or more years, it is not hard for us to be unemployed for months, maybe for years,” Liu said.

He took four months to land a job creating content for his company’s TikTok account for the British market. Liu celebrated his new job by dating.

“In the past 28 years, I just refused my parents’ invitation to date with a girl, but when I got this offer, then I was a little happier,” Liu said.

Liu agreed to go on two blind dates that his parents set up. He got the job, but the dates didn’t work out.