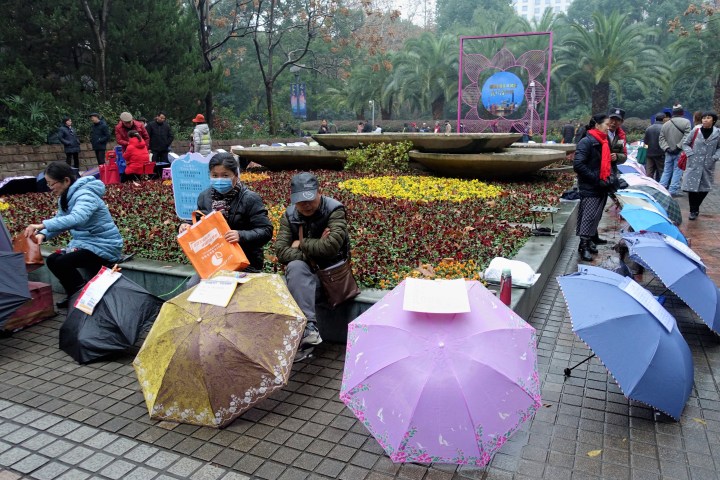 On a Saturday in January 2020, real estate agent Eric He strolled through Shanghai’s People’s Park.

The park on weekends transforms into a so-called marriage market. Well-intentioned parents advertise their unmarried children’s qualities on handwritten notes tacked on to umbrellas.

Mr. He, a bachelor who is under pressure from his parents to get married, should be able to boast that he is the first in his family to graduate from college and can save money regularly.

Yet, he is treated as a second-class citizen mainly because his household registration, or his “hukou,” is in the Chinese countryside and not in Shanghai. This limits his ability to buy a home, get any future children into schools or retire in the city.

“For anyone not from the city, we are seen as village people in the eyes of the Shanghainese,” Mr. He said.

For decades, hundreds of millions of people like Mr. He from the rural countryside head to cities like Shanghai for a better life. The most recent official statistics, from 2019, show that 40% of Shanghai’s population of 24.3 million do not have household registrations in the financial center.

The COVID-19 pandemic has pushed some of them out before they could realize their big-city dream, which was no easy feat even before the coronavirus outbreak.

The lack of a Shanghai household registration was a deal breaker for one mother standing near Mr. He at the People’s Park marriage market.

“If he isn’t registered to Shanghai, that won’t work. My daughter has an apartment, she has a Shanghai hukou, has a good job and a good education,” she said. “I want a son-in-law with the same background as her.”

That may sound harsh, but Mr. He understood her point. He and a Shanghai girlfriend broke up over the same issue.

“Her household registration was in Shanghai, [and obtaining] this identity is an insurmountable barrier [for me],” Mr. He said.

Still, he was initially drawn to China’s financial center because of the opportunities available.

Shortly after he joined the real estate firm in Shanghai, a colleague earned 500,000 yuan ($77,000) in commissions in one month.

“I’m now in my late 20s. I’ve got less than 30 years to go before retirement, which isn’t a long time,” Mr. He said. “If I have one or two big opportunities like that, I can change my life.”

The Zou family hails from eastern Jiangxi province but worked in Shanghai for years. However, low salaries and the lack of Shanghai registration eventually drove the family out.

The son, Zou Chaogang, returned to the city as an adult and ended up in a factory that paid him less than $9,000 a year taking photos to authenticate Nike and Adidas shoes.

“I did the same task every day, and it got boring after a while,” Zou said.

He quit his factory job after three months, just before the pandemic lockdown.

“I feel lost. I don’t know what to do in Shanghai. When I look for a job, I need it to provide free room and board. Otherwise rent will take up half a month’s salary. Food is expensive as well,” he said. “It’s just so hard to survive here.”

In late January 2020, Zou and Mr. He were outside of Shanghai spending time with their families for the Lunar New Year when China went into a lockdown.

They could not return for months.

During this time, Mr. He’s parents also returned to their hometown from southern Guangdong province. After working there for nearly two decades, they also couldn’t settle there. They started up their own business in their native central Hubei province.

Mr. He, who was not paid by his Shanghai company during the lockdown, started to rethink his big-city dream.

“Shanghai is such a stressful city, and I’ve always wanted to be closer to my parents,” he said.

Mr. He found another real estate job near his village, where the cost of living is lower. With the help of his parents, he even bought an apartment.

“My salary is higher than in Shanghai. The company pays into my social security and my housing fund, which I didn’t get in my Shanghai job,” Mr. He said. “I also get perks like a cake for my birthday.”

Mr. He said he still works six days a week and even longer hours, but he is content. He is now in his hometown, and with property. But he does not regret trying to make it in Shanghai, he said.

As for ex-factory worker Zou, he hasn’t returned to Shanghai since the lockdown lifted in April.

Before Zou left the city, he and a friend stopped in a karaoke booth at a mall. He said he sings to relieve stress.

They chose a song about sticking with your dreams called “Boundless Oceans, Vast Skies” from the ’80s Cantonese rock band Beyond.

The chorus goes: “Forgive me for loving freedom in life/ Though I’m afraid of falling one day/ Anyone can abandon his or her ideals/ I won’t fear, even if one day it’s just you and me left.”

Zou’s dream is to make enough to pay off his credit cards and gambling debts.

He is still trying to make it in other cities.