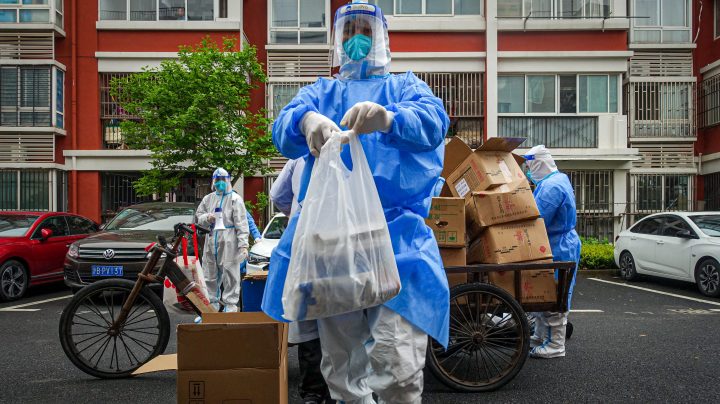 COPY
A volunteer clad in safety gear delivers food during the lockdown while Shanghai residents were not allowed to leave their apartments. Charles Zhang/Marketplace
COVID-19

A volunteer clad in safety gear delivers food during the lockdown while Shanghai residents were not allowed to leave their apartments. Charles Zhang/Marketplace
Listen Now

I received my first proper food delivery during lockdown a month after being sealed in my home.

For a moment, the barbecue ribs, burger and fries gave me and my boyfriend a feeling of normalcy.

Before these strict anti-COVID measures, food delivery was a staple in my life. If I forgot onions for the pasta one night or had a craving for bubble tea, I could get those items delivered within 30 minutes for less than $2. But on April 1, Shanghai went into citywide confinement, and the supply chain collapsed.

“During the lockdown, all these delivery people are not allowed to leave their home,” Long Wong of ProA Supply Chain in Shanghai said.

The city is easing some restrictions, but for more than 60 days, most residents were stuck at home. Ordering basic things, such as food and groceries, was difficult, and the task of getting fed fell on district governments, neighbors and friends.

Shanghai’s government sealed the city’s border. While Shanghai is a transport hub, many of its retail warehouses are located just outside the city, where land is cheaper, according to Wong.

Businesses were also closed down and forced to apply to reopen.

“The attitude from the central government is that you have to be strict. So, they [were] only letting the most essential, for example, medical supply, to go through,” Wong said.

Suddenly, over 10 million households had to wake up at the crack of dawn to fight for the limited delivery spots from the few drivers who were still able to move about. The household of Marketplace news assistant Charles Zhang was cycling through at least five food apps.

The process is so complex that my friends circulated an Excel spreadsheet on what time different apps start taking orders. I got one delivery slot, but by the time I checked out, the only thing left in my virtual cart was a case of Tsingtao beer.

The sudden food shortage was jarring given how convenient delivery usually is in Shanghai. Part of the advantage stems from the fact that China’s economy opened to the outside world only in the late 1970s.

“Unlike the U.S., [where] we have a lot of big-box retailers for the last maybe 100 years, in China the big-box retailers didn’t really establish their presence until the 2000s, and [this] time frame coincided with the e-commerce revolution,” Wong said.

The investment in e-commerce has meant that same-day delivery was built into retailers’ plans early on, he added. When Amazon was pushing out in-home delivery in 2017, I was living in the southern Chinese city of Shenzhen, and I had already been receiving packages in a third-party locker service in front of our apartment building when we weren’t home. The delivery driver would text me the locker code to retrieve the package.

“Unlike the U.S., which is very spread out, China [has] a few mega cities or [is] city-centric,” Wong said. “Every city is like a New York City to the China landscape … so you have a lot more forward distribution centers and shorter fulfillment time.”

Grocery delivery has followed the same route. “Grocery providers are building small warehouses close to population centers [that] can deliver in 29 minutes, like Dingdong … to supermarkets serving as [both] a warehouse and a retail spot. And they deliver out to the surrounding” area, Wong said.

He said the final piece to complete the last-mile delivery is China’s army of drivers on electric bicycles, who typically hail from poorer provinces.

Bought 6 boxes of this deluxe milk which we would only buy at a difficult time like this, since we don’t have the right to be picky. 10 US dollars for 3 liters milk. pic.twitter.com/n3d344yyxj

Without the usual fleet of delivery drivers, I have been lucky to have capable neighbors who organized bulk buys. But the food is often pricier than usual, and I must buy 60 eggs, 14 pounds of vegetables or a case of avocados in one go.

There are also box sets of mixed groceries from grocers. I once paid $70 for one, and all I wanted was the eggs and meat. These are not great options for consumers, but it simplifies things for suppliers.

“By everybody eating the same thing, you save a lot of manual labor in terms of picking and sorting and packaging, right? So instead of you getting ABC and he gets XYZ, everybody gets DEF,” Wong said.

I also had friends and underground channels to source soy sauce, instant noodles and even luxury items like ice cream bars.

My district government also provided handouts. One week, we would receive food like a carrot, three potatoes, some bok choy and two chunks of fatty pork. The handouts were helpful, but we were never sure when the next one would arrive.

Another week, we’d receive bean curd sticks, fermented bean curd and gluten — stuff I’ve not cooked with before. But we were lucky. Some districts, like Zhang’s, had received only half the amount of goods.

Videos of fed-up residents show them banging pots and pans to demand more food, while others protested the endless lockdown.

“Up until now, medics can’t save lives, children can’t go to school, workers can’t work, and we tolerated it all. Chinese people are very peaceful. But once you touch on our ability to eat and survive, that is crossing a line,” the man said.

Perhaps the hardest hit are delivery drivers. “After they leave their home, they cannot go back. [We’ve] seen reports that people live under the bridge. They are subject to daily [COVID] testing. They have a tough time finding things to eat, even though they are delivering food to people,” Wong said.

Shanghai is phasing out restrictions, but that could change if there are new COVID cases.

“A lot of companies, all [of a] sudden, are interested in having regional warehouses [and] to have multiple supply chain route,” Wong said.

If there’s a snap lockdown again, Zhang said, his place has 80 pounds of flour and 4 gallons of cooking oil.