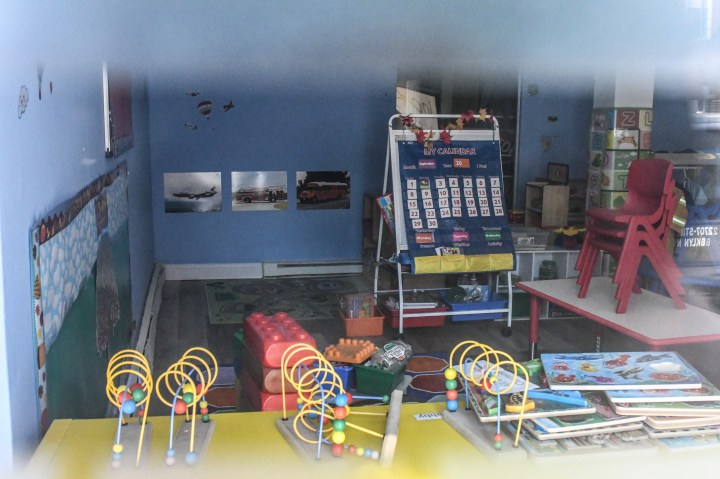 COPY
The child care sector is down nearly 100,000 workers since the start of 2020, according to one estimate. Stephanie Keith/Getty Images

The child care sector is down nearly 100,000 workers since the start of 2020, according to one estimate. Stephanie Keith/Getty Images
Listen Now

Keshondra Bain worked long hours as a teacher assistant at a day care facility in Brooklyn. But there were moments of joy, like when a little girl who didn’t speak suddenly started talking.

“She just started opening up. It was so nice,” Bain said. “That’s what made me love coming to work. Or when a child wouldn’t want to leave, and they want to stay with you and not go with their parents. That made me feel like they actually liked coming to school.”

But Bain said after three years, she was only making $17 an hour. And in New York City, with a Bachelor of Arts in children and youth studies, she felt she was worth more. So last fall, she left to work at a nonprofit, even though she misses being a teacher assistant.

“We’re the ones that are shaping and molding the kids,” Bain said. “So it just sucks that we’re underpaid.”

Lots of providers like Bain left the caregiving profession during the pandemic. And that’s meant more women are taking care of their kids and not able to pursue their own professions.

“There are a lot of women who are still at home when they would like to be working because they don’t have child care,” said Robert Frick, a corporate economist with the Navy Federal Credit Union.

The Labor Department said Friday that the labor force participation rate in June was 56.8%, down more than 1 percentage point from where it was before the pandemic in February 2020.

“The labor force participation rate is the percentage of the population who are actively participating in the labor force,” said Megan Dunn, an economist with the Bureau of Labor Statistics. “So that’s the people who are working or looking for work divided by the total population.”

That means fewer women are working — or even looking for work — than were right before the pandemic.

“COVID was the bomb that really broke down the child care system,” Frick said. He estimates that we’re down at least 100,000 child care workers since early 2020, and the ones who are left are able to charge more.

“So the gap between what people can pay and what they’re paying for child care workers continues to widen.”

That’s one of the key challenges with child care: It continues to be one of the biggest expenses for parents, despite the fact that it’s a challenging and poorly paid profession.

“This is particularly important for low-wage earners, because their scheduling tends to be less consistent,” she said. “For that group, the supply of available child care providers is even more limited.”

Wilson suggested federal investments in child care, like what was in the original Build Back Better infrastructure bill.

“Women are also the majority of workers in the care industry, and so making significant investments in that industry is also important to boosting their wages and helping to support them, as well.”