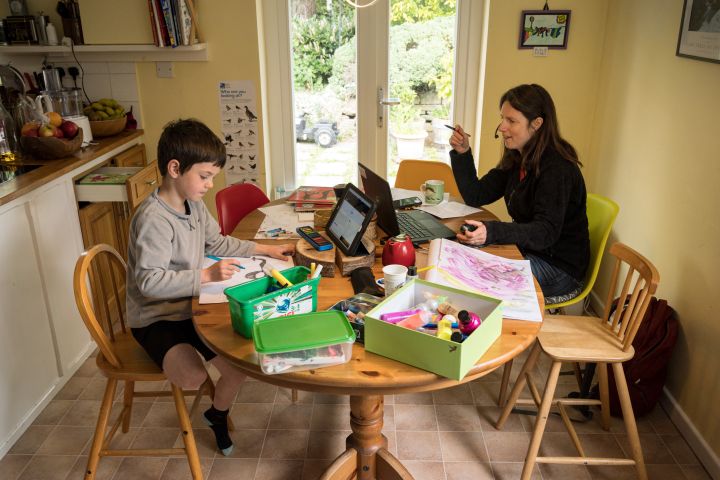 A new report from The Century Foundation and Center for American Progress estimates women could lose $64.5 billion a year in earnings if current trends in workforce participation hold.

The economic devastation of the pandemic has hit women particularly hard. With many day cares remaining closed or at limited capacity and more than half of school-age kids learning from home, mothers have been picking up the slack, often at the expense of work.

Women’s labor force participation has now fallen to its lowest level since 1987, with 865,000 women dropping out between August and September as remote school started up. An analysis of federal data found mothers in dual-income heterosexual households were cutting their work hours four to five times more than fathers.

Figuring out child care has always been a struggle for James Cox. Before the pandemic, she was working crazy hours in two jobs — as a restaurant server and a project manager for a nonprofit in Oakland, California.

“And now with COVID, it’s like everything is just turned upside down,” she said.

Schools are closed, day cares are limited and expensive, and the friends she used to lean on to watch her 5-year old daughter aren’t an option because of the need for household isolation. She’s lost most of her work, but she can’t really take new jobs because of the child care situation.

“This is not an individual family problem, this is an everybody problem,” said Julie Kashen, a senior fellow with The Century Foundation and co-author of the report.

Researchers estimated lost wages based on analysis of working trends in federal data from April at the height of lockdowns. Since then, labor force participation among women has barely improved, even as more men have returned to work.

Titan Alon, an economist at the University of California, San Diego, said dropping out can have consequences far beyond the current crisis.

“You kind of miss those stepping stones, you miss those career progression opportunities,” he said. “And then when you come back, you’re sort of less valuable to an employer.”

Natalie Wright is afraid of that. A biology professor at Kenyon College in Ohio, she is managing to teach part-time, despite being home with two kids after losing a spot in day care. But she worries the slowdown in her research will be disastrous for her career.

“I never know when I’m about to be interrupted by a child, which makes writing and the deep thinking that’s required of my research, almost impossible,” she said. “It makes me feel terrified about whether I will get tenure, and I am the family’s primary breadwinner.”

In the absence of policies to address these disparities, the report says the drop in women’s earnings could slow economic recovery.