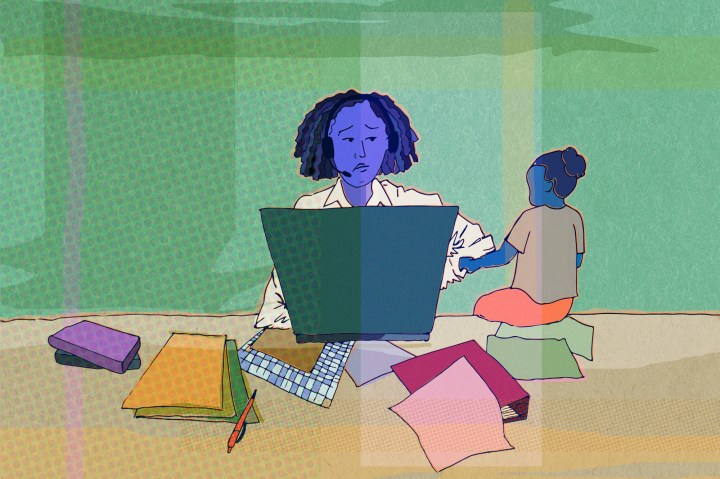 COPY
The need to supervise kids at home has led to some parents dropping out of the work force. Rose Conlon/Marketplace
Unworkable

The need to supervise kids at home has led to some parents dropping out of the work force. Rose Conlon/Marketplace
Listen Now

The demands of remote and hybrid schooling are hitting working parents hard, according to the results of our latest Marketplace-Edison Research Poll. Nearly 20% of parents with kids learning at home had to take a leave of absence or quit their job.

Kelly Newman of New Jersey is one of them. She and her wife, Rachel, have a 9-month-old, twin 3-year-olds, an 8-year-old and twin 9-year-olds.

Several of the kids have special needs. They’re going to school half days, a couple days a week, then learning online and going to therapy — all at different times and places.

Before the pandemic, part-time nannies made it possible for both parents to work full-time. Kelly Newman is a family law attorney and Rachel is a teacher. Now with the kids frequently home, they can’t afford full-time help. As much as they tried to split the child care between them, it wasn’t working.

So in July, she quit her job. She’d lost most of her clients while out on extended family leave, and the family needed the strong benefits Rachel’s teaching job provides.

According to federal data, 865,00 women dropped out of the labor force between August and September — four times the number of men. Women still earn less than men, so in heterosexual households, it often makes the most sense for mothers to sacrifice work to care for family.

Betsey Stevenson, an economist at the University of Michigan, said once parents pull back from work, they can fall behind forever.

Taking a break can also contribute to perceptions that mothers aren’t as dedicated to work. But Stevenson hopes the pandemic could be a turning point.

“When you go to interview for a job and you’ve got that COVID blank on your CV, it’s not going to be that unusual,” she said.

Kelly Newman hopes to start her own law practice when things go back to “normal,” but right now that feels far away.

“Having advanced degrees does nothing for you if the economy isn’t stable enough to allow you the ability to work hard,” she said.

She’s now trying to get unemployment, but her application is tied up in appeals.