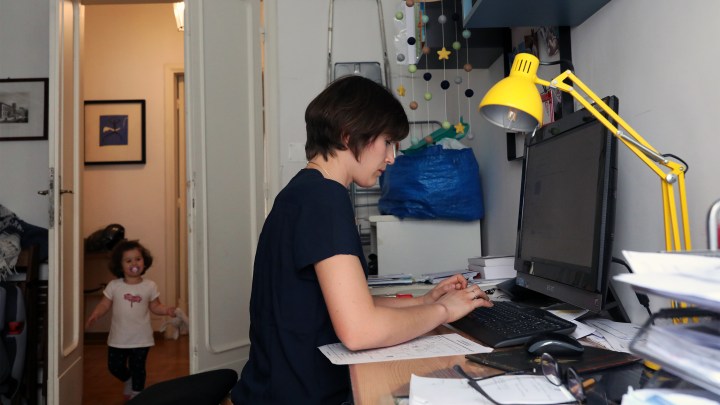 COPY
A mother works from home during the COVID-19 pandemic. Women are reducing their work hours much more than men to take care of children and attend to household needs. Marco Di Lauro/Getty Images
Parenting in a Pandemic

A mother works from home during the COVID-19 pandemic. Women are reducing their work hours much more than men to take care of children and attend to household needs. Marco Di Lauro/Getty Images
Listen Now

The pandemic has exacerbated the challenges of juggling full-time work with caring for and home-schooling children. Continued uncertainty around school reopenings has many families facing the prospect of continuing to do double duty indefinitely, which could have an effect on job security.

A woman in California has sued her employer for discrimination, saying she was fired from her job at an insurance company after a supervisor complained her child care responsibilities were interfering with her work — a contention that could be on the rise as schooling and child care disruptions stretch on.

In the early weeks of lockdown, Ruth Martin, senior vice president of the nonprofit MomsRising, was optimistic the crisis might have an upside: Companies were finally being forced to provide the flexibility and accommodations for families that her organization has long fought for.

But she fears those promises are starting to fray. “We do worry that we’re going to see more examples of employers discriminating against their employees who have these caregiving responsibilities.” she said.

Last week, Florida State University faced a backlash when it announced employees could no longer care for children during work hours. The school has since retracted the policy, but it reflects the growing risks for working parents, said Joan C. Williams, the founding director of the Center for Worklife Law at UC Hastings College of the Law, which runs a help line for workplace discrimination.

“We just have hair-raising stories of the kinds of treatment that people are being given,” she said, noting increasing reports of parents being fired, forced out by poor treatment or having hours or pay cut.

The burdens are falling hardest on women. Julia Martin is an education law attorney near Silver Spring, Maryland, who’s been sneaking in work during her children’s nap times and in the evenings. Like many moms, she’s taken on the bulk of the extra child care for the family.

“My husband has about four hours of video calls a day, and so I often get kid duty,” she said.

A survey by Boston Consulting Group found women are dedicating on average 15 hours a week more than men to educating children and household tasks during the pandemic.

“It is women who are reducing their work hours four to five times more than fathers are doing,” said Caitlyn Collins, a sociologist at Washington University in St. Louis.

Even women who can maintain a full workload face a penalty when, inevitably, kids run through the background of video calls, she said.

“The very same action of stepping away from the call to tend to a child is perceived very differently in the workplace to the advantage of men and to the disadvantage of mothers,” she said.

Women workers tend to be perceived less favorably and paid less when they have children, while men get a career and pay boost.

What’s stopping so many people from heading back to work? It’s not just COVID.