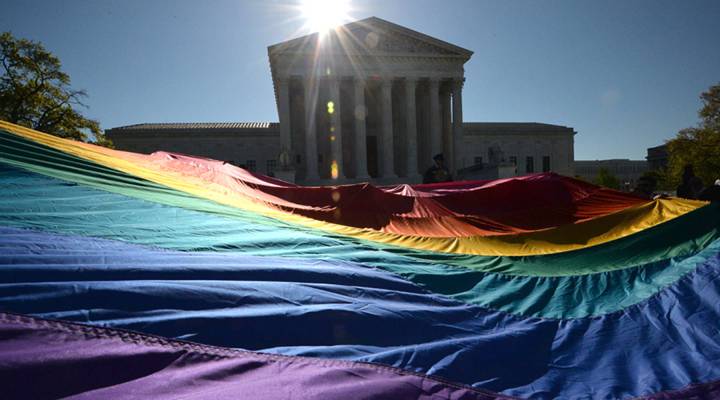 The U.S. Supreme Court is hearing a set of cases this week that will determine whether existing federal anti-discrimination legislation extends to gay, lesbian and transgender employees. The Civil Rights Act of 1964 outlawed discrimination on the basis of race, color, national origin, religion or sex. Marketplace host David Brancaccio talked to Amy Howe, co-founder of SCOTUSblog, about the three cases and the workplaces involved. The following is an edited transcript of their conversation.

David Brancaccio: Under Title VII of the Civil Rights Act, it seems as if one could be fired on the basis of their sexual preference, until these cases.

Amy Howe: There’s no federal law that says you can’t be fired based on your sexual orientation. Title VII of the Civil Rights Act of 1964 says that you can’t be discriminated on in the workplace because of sex.

Brancaccio: There’s a gay man in Georgia who used to work at child welfare services as a coordinator and also was driven out.

Howe: That’s Gerald Bostock. He worked in Clayton County, Georgia, as a child welfare services coordinator. He claims he was fired because he was gay, although he says that the county manufactured an excuse to fire him. He went to court, and the U.S. Court of Appeals for the 11th Circuit says that Title VII doesn’t bar employers from firing someone, that the phrase “because of sex” doesn’t include sexual orientation.

Brancaccio: Also under consideration: the case of a transgender woman in Michigan.

Howe: Yes. This is the case of Aimee Stephens who worked at a funeral home in Michigan. When Aimee started working at the funeral home, Aimee was Anthony Stevens. During the time that Aimee worked there, Aimee went to her employer and said “You know, I’m going to be coming to work, I’m going to be transitioning from a man to a woman,” and the employer had a dress code. Men and women were expected to dress in a particular way, and the employer fired her. Aimee went to court. The funeral home is bringing the case to the Supreme Court. And this is a slightly different question, because it involves transgender employees rather than gays and lesbians. But it’s the same basic question: whether Title VII bars discrimination against transgender people.

Howe: That’s absolutely right. The other interesting thing that could be set up if the court were to rule that Title VII does include discrimination based on sexual orientation, based on transgender status, that companies can’t discriminate against gays and lesbians, against transgender people, then it sets up another battle, sort of the interaction between those rights and the rights of religious employers.