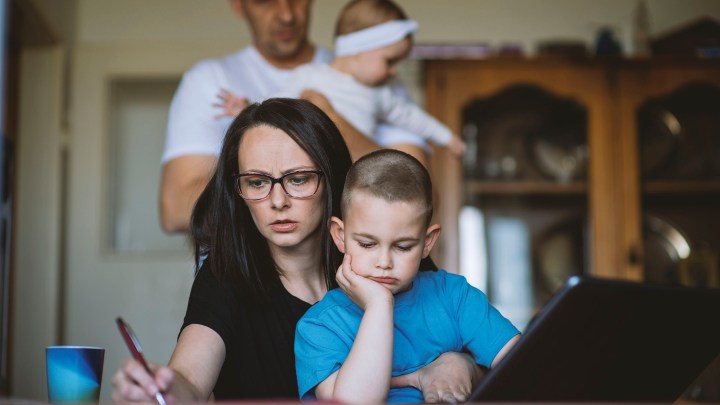 COPY
Florida State University employees won’t be allowed to watch their kids while working because public schools in the county are scheduled to open. Mladen Sladojevic via Getty Images
COVID-19

Florida State University employees won’t be allowed to watch their kids while working because public schools in the county are scheduled to open. Mladen Sladojevic via Getty Images
Listen Now

Update (July 2, 2020): On the evening of Wednesday, July 1, the Florida State University human resources office held a previously scheduled townhall-style Zoom meeting for employees to provide guidance about issues related to returning to work on campus, and the telecommuting policy was discussed.

On Thursday, Renisha Gibbs, associate vice president for Human Resources, plans to provide further clarification on this policy to employees.

Part of Gibbs’ message to employees is the following:

“We want to be clear — our policy does allow employees to work from home while caring for children. We want everyone in our community to be focused on doing their part to keep each other safe. We are only requesting that employees coordinate with their supervisors on a schedule that allows them to meet their parental responsibilities in addition to work obligations.”

Is it OK to get paid to work from home while you are keeping an eye on the kids? Employer rules vary. Florida State University has amended its policy, saying employees while on the clock at home can’t also be caring for their children.

Marketplace’s Erika Beras looked into this. The following is an edited transcript of her conversation with “Marketplace Morning Report” host David Brancaccio.

Erika Beras: Let’s start back in March. That’s when stay-at-home orders were issued and employees began remote work. Before that, Florida State University had a policy where if you were working from home, you couldn’t also be watching your kids. But that all went out the window earlier this year when schools and day care and pretty much everything else shuttered. The school issued a temporary remote work agreement.

Fast forward to now as Florida State prepares the next stage of reopening. FSU employees won’t be allowed to watch their kids while working because public schools in the county are scheduled to open. If an employee doesn’t abide, the university can rescind approval for remote work.

David Brancaccio: Which will put some employees, presumably, in a bind.

Beras: The school did issue a statement to employees saying if local schools scale back, the university may reconsider its policies. And Florida has seen a spike in cases. Because of that, the university isn’t moving forward as quickly as it had planned in moving on to the next phase of opening next week.

But what this could mean is that institutions may not be as flexible as they had been at the beginning of the pandemic when it comes to accommodating their employees. In a lot of ways, we are having multiple crises right now. There’s the pandemic, but within that, a crisis of child care. I did a story about this last week, and all of the experts I spoke with mentioned a couple of things: One is that without child care women will lose a lot of the gains they’ve made in the past few decades. And, the economy just doesn’t work without day care, camps, schools and after-school care.