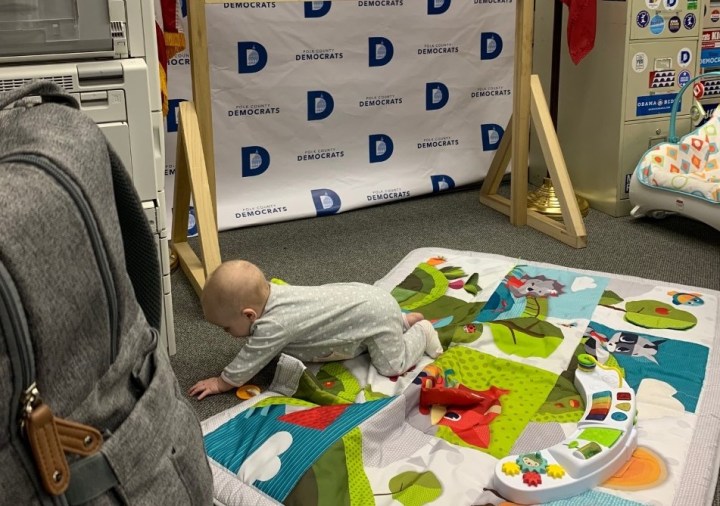 For the last few months, Ginny Downs has been going to work with her mother every day. When she starts day care, likely soon, it'll cost more than her parents' mortgage. Courtesy Judy Downs
Check Your Balance ™️

For the last few months, Ginny Downs has been going to work with her mother every day. When she starts day care, likely soon, it'll cost more than her parents' mortgage. Courtesy Judy Downs

These last few weeks and months have been, to put it mildly, a bit of a busy time in Iowa. Especially for people who live and breathe politics, like Judy Downs.

As executive director of the Polk County Democratic Party, Downs is in charge of finding sites for 177 caucuses, and recruiting and training volunteers for all of them. She’s done most of that wearing a baby on her chest.

“My daughter comes to work with me every day,” she said. “We call her the caucus baby.”

It’s a rare setup, to be sure. Made possible by a supportive boss, and also by the fact that Downs is the Polk County Democrats’ only full-time employee. But it was never her plan. Not until she started looking into day care.

“When I was expecting, I was looking at coming back in eight weeks, and I was so anxious about how I was going to pay for that,” Downs said. She and her husband, Andrew, both work full time, both at jobs they love. Neither makes a lot of money. And already, they’re paying about $800 a month for their older son, Charlie, to go to public preschool. The prospect of shelling out another $1,100 a month for day care was daunting.

“It would have basically put us on a rice and beans diet, and made it absolutely impossible to save as a young family,” Downs said. “By keeping her with me, I feel much better about our financial situation.”

For the average family in Iowa, and across the country, child care is not just expensive, it’s unaffordable. Day care for a baby averages about $10,000 a year, which is more than a year of in-state tuition at a four-year college, and more than most families in Iowa spend on rent or a mortgage. And that’s just with one kid. With two, the Economic Policy Institute estimates that a typical family spends 28% of its income on child care, four times what the U.S. Department of Health and Human Services considers “affordable.”

“That’s pretty expensive,” said Elise Gould, a senior economist at the Economic Policy Institute. “Many families are struggling to be able to pay those costs, and some parents actually drop out of the labor force because they can’t afford that.”

There’s also the problem of being able to find child care in the first place. Over the last five years, Iowa has lost 40% of its day care providers, leaving the state 350,000 slots short and many parents struggling to find a place for their kids to go. Around 25% of Iowans now live in a child care desert, according to the Iowa Women’s Foundation. These issues are especially acute in rural Iowa.

Still, despite being a major issue in the state and across the country, it is only recently that it’s started to register on the campaign trail. It was not until the fifth debate, in November — moderated by all women — that the candidates were first asked about affordable child care. After that, they were asked again, at the last debate before the caucus, in Des Moines in mid-January.

That the cost of child care is coming up in that forum, at that level, feels like progress to Jill Applegate, co-chair of the Children’s Policy Coalition in Iowa.

“Kids issues, like child care, haven’t even been part of the conversation for so long, that people didn’t even realize that it was an issue that they could vote on,” she said. “I think the increased conversation around child care this election … has really created more of a buzz around the issues amongst voters.”

Other issues of affordability — rising rents, health care, the cost of college — have been a central part of the conversation on the campaign trail and the debate stage, but it’s taken longer for the issue of child care to rise.

There is, broadly speaking, consensus among the remaining Democratic presidential candidates that something needs to be done. Both Elizabeth Warren and Pete Buttigieg have proposed detailed plans for universal, federally funded child care programs that would be free for low-income families and kept affordable for everyone else. Bernie Sanders and Joe Biden have both also said they support the idea of universal child care, without going into specifics. And Sen. Amy Klobuchar has proposed making child care affordable “for families making up to 150% of their state’s median income.”

“I think for many years, families thought of it as their own failing that they couldn’t make ends meet on their own,” said Gould, of the Economic Policy Institute. “Given that this conversation has reached a national level, families are seeing that it’s not just their own personal failings … but it’s actually a much bigger problem, and we need bigger interventions to try to solve it.”

“How does anyone afford to work during the day?”

For the last five years, to solve her own child care issues, Jessica Rebeschini has barely slept.

She’d work evenings or overnights at Perkins Restaurant & Bakery as a server, come home, sleep for two hours, and then be up all day with her kids. She’d sneak in maybe another two-hour nap in the afternoon before heading back to work again after her husband, Ron, got home from his job as an optician.

“That way we didn’t have to pay for day care,” she said. “My husband’s job just doesn’t pay anything, and child care for multiple kids is just really hard to come up with on a weekly basis.”

Doing this — working opposite shifts, not having to pay for child care, barely seeing each other — they were able to get by, financially. It took a toll, though, on their marriage, on her health.

“I walked around like a zombie,” Rebeschini said. “I gained a bunch of weight and I started eating poorly because it was like, ‘Oh, I’m just gonna run through the drive-thru on my way to work, because I don’t have time, or I’m going to eat at work.’”

When she got pregnant with their third son, things got even harder. She got so sick that she had to cut way back on her hours at the restaurant, and losing that pay, “threw us so far behind that I wound up having to file for bankruptcy,” she said. “I was working 60-plus hours a week, and we couldn’t catch up.”

Then a couple of weeks ago, after years of looking and applying, she got a job. Exactly the kind of job she had been hoping for. A permanent one, a stable one, one with benefits.

“My entire family celebrated with me, because it was like, oh, good, there’s the light at the end of the tunnel,” Rebeschini said. “I’m finally going to have a good job with good benefits. It’s something that I can retire off of. I don’t ever have to think about, what are we going to do? Because this is it.”

As soon as she and her husband started looking for day care for the kids, though, they realized that even with her new job, which would pay double her husband’s salary, they still couldn’t make the numbers work.

“I knew that it was expensive,” she said, “but when you add all the numbers up, you’re like, ‘holy cow. How does anyone afford to work during the day?’”

So they made a choice, a purely economic choice, a choice that more than 17,000 parents in Iowa have to make a year. They decided that Ron would quit his job, even though he was happy there, and stay home with the kids.

For the Rebeschinis, ultimately, that just didn’t feel worth it.

“Because if someone gets sick or something we still have to pay for the day care, but then we have to miss work and not get paid for that,” she said. “That’s why we decided that it wasn’t worth it.”

Judy Downs sees her friends making these kinds of calculations all the time.

It’s a conversation she and her husband had, too, when she got pregnant with Ginny, whether one of them should quit and stay home. But they both have their dream jobs, and they make about the same amount of money, “so there’s not a very logical person who would stay home,” she said.

For her, even if it ends up for a while that she’s working to afford child care to be able to work, that does feel worth it.

“One of my biggest concerns is taking time away from the workforce and what that does to my valuation in the future,” Downs said. “I think one of the best things I can do for my future income is to keep working, even if that means making huge sacrifices throughout my children’s youth.”

Still, it feels some days like she’s staring down a long tunnel with no light at the end.

“A tunnel of never-ending child care costs. I felt really excited when my son stopped day care and went into preschool. But then my daughter was born, and now I have another four years of $12,000 to $13,000 a year in child care expenses,” Downs said.

Because, at 7 months, Ginny is now almost too big, too mobile, to come to work with her much longer. So, soon — if they can find a spot — they will be putting her in day care.

“It’s more than our mortgage. It’s the biggest expense we have.”

How has the cost of child care affected your life? Have you made personal or professional decisions because of it? Have you decided to only have one kid, or not have kids at all, because child care is so expensive? We want to hear your story. Fill out the form below, and a Marketplace reporter may be in touch.

The new frontier of voter tracking