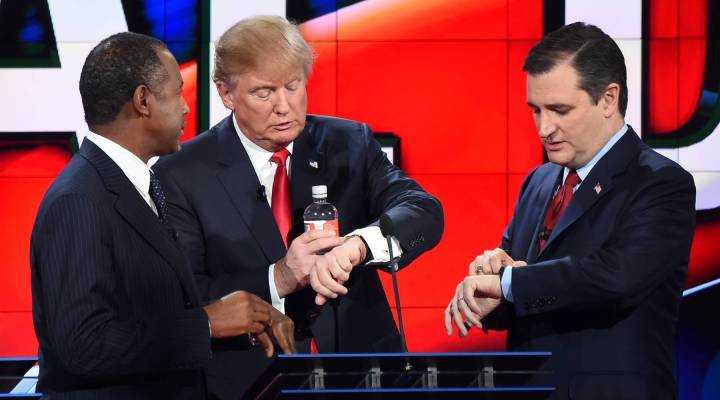 Republican presidential hopefuls Donald Trump (C) and Ted Cruz (R) check their watches at Ben Carson (L) looks on during a break in the Republican Presidential Debate, hosted by CNN, at The Venetian Las Vegas on December 15, 2015 in Las Vegas, Nevada.  ROBYN BECK/AFP/Getty Images
By The Numbers

That’s the percentage of the vote that Senator Ted Cruz carried to win the Republican caucuses in Iowa. Mike Huckabee, who suspended his campaign Monday night, received just 1.8 percent of the vote. That leaves some voters wondering: when a candidate drops out, what happens to the money in their super PAC?

While the politically informed worry about who won the Iowa caucuses, people elsewhere on Twitter are more concerned with the following question: Does Ted Cruz wear two watches? Posts on social media show Cruz clearly wearing two wristbands, one on each arm. But as the Atlantic writes in its exhaustive examination of the facts, one of them is likely a Fitbit.

That’s how much, per hour, Cubans are being charged for use of Internet hotspots in Cuba. And even while most Cubans only make $20 an hour, use of WiFi has proven to be hugely popular. Now, in a partnership with Chinese telecom operator Huawei, Cuba has announced plans to launch broadband Internet for private use, though on a limited basis.

As of this writing, that’s how many subscribers the Fine Brothers, a hugely popular vlogging duo, currently have on YouTube. But the past few weeks have seen droves of fans unsubscribing from their content. Why the sudden unpopularity? The brothers attempted to trademark terms related to the “reaction video” format — a move that angered fellow video makers who post similar content. As BBC Tech writes, the brothers have since apologized, and have rescinded their trademark application.