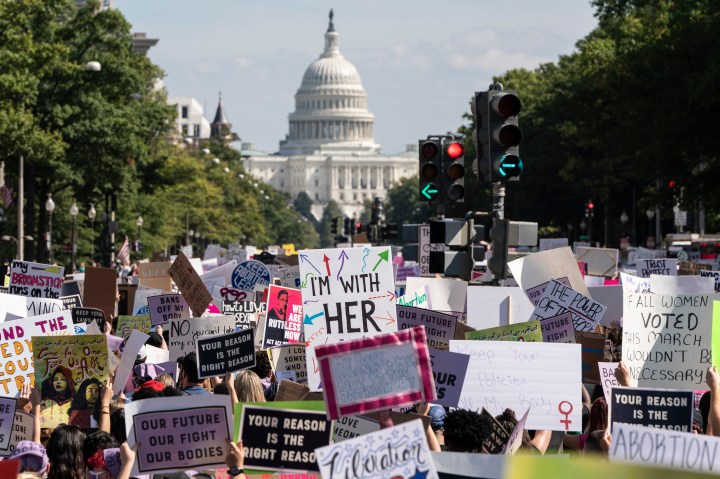 Disney, Dick’s Sporting Goods and Facebook’s parent company Meta are among the employers that have announced they will cover employees’ expenses to travel out of state to access abortion services now that Roe v. Wade has been overturned. They follow companies like Amazon, Yelp and Citigroup, which announced such policies last month when the draft decision was leaked.

For more, we spoke with “Marketplace’s” workplace reporter Meghan McCarty Carino. Below is an edited transcript of the conversation.

Andy Uhler: You’ve done a lot of reporting on the pressure that companies are increasingly feeling to take stands on political and social issues. This one seems about as complicated as it gets. What do you feel like are informing these decisions to come out and offer a new benefit like this?

Meghan McCarty Carino: Yeah, I mean, this is really uncharted waters for companies. You know, it brings up all kinds of questions – how practically can these benefits be used? What kind of legal liability could it open companies up to as to why an employer would wade into this at all? I spoke with Hubert Joly. He was the CEO of Best Buy until 2020. He’s now at Harvard Business School:

“The reason why companies will care about this. One is the health and well being of their employees and their families and two, it touches something that’s really important to companies, which is diversity and inclusion.”

McCarty Carino: Many companies are still struggling to recruit and retain enough workers, the women’s labor force participation in particular, it hasn’t fully recovered from that dramatic drop that we saw during the pandemic. So there is a practical dimension for many employers.

Uhler: At the same time, there are plenty of companies who have decided not to take this step or haven’t taken it yet, including, as of right now, the country’s biggest private employer, Walmart. Do you have a sense of how widely available of benefit like the one you’re talking about might end up being?

McCarty Carino: Yeah, right now we’re talking about workers at a pretty narrow slice of very big companies in what are generally pretty white-collar sectors: tech, finance, entertainment. Those big retail companies like Amazon or Dick’s Sporting Goods, they are going to employ workers at a broader range of income levels. But the experts I’ve spoken to have said this kind of benefit is likely to end up like a lot of other social benefits that companies provide – things like paid time off, health insurance – where workers at small companies – low-wage workers, part-time workers, gig workers – won’t be getting access to this benefit. According to federal data, less than a quarter of private sector workers get paid family leave, and among the lowest wage workers, the share is closer to just 10%. When it comes to paid sick time, about two thirds of the lowest paid workers don’t get it.

Marketplace reached out to Walmart for a statement and has not yet heard back.