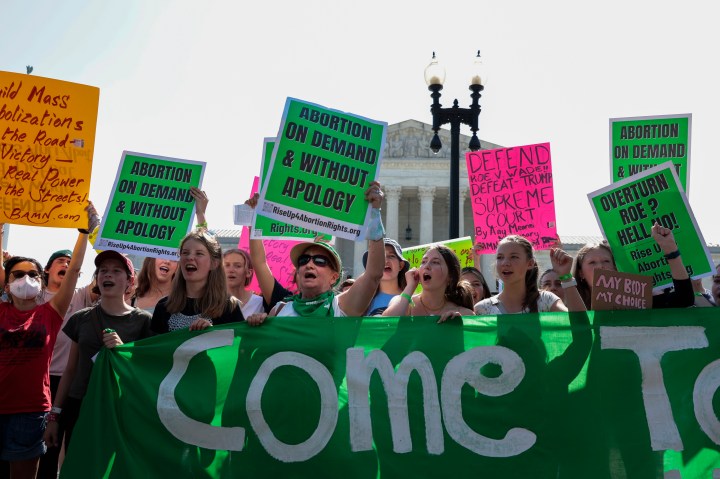 The Supreme Court on Friday overturned its landmark 1973 decision Roe v. Wade, a ruling that will force millions of Americans to travel out of state for abortions and face higher health care costs.

Trigger laws banning abortion will go into effect in more than a dozen states almost immediately.

The Supreme Court’s conservative justices joined together to uphold Mississippi’s abortion ban after 15 weeks in a 6-3 decision. The vote to overturn Roe v. Wade was 5-4 — Chief Justice John Roberts did not join his conservative colleagues.

“We hold that Roe and Casey must be overruled. The Constitution makes no reference to abortion, and no such right is implicitly protected by any constitutional provision,” wrote Justice Samuel Alito in the final opinion.

The three liberal justices — Stephen Breyer, Sonia Sotomayor and Elena Kagan — dissented. “With sorrow — for this Court, but more, for the many millions of American women who have today lost a fundamental constitutional protection — we dissent,” they wrote.

Here’s a look at how states will respond.

What’s the immediate impact of the decision?

Within a month, we will likely see a rapid expansion of the market for abortion medicines ordered online from overseas pharmacies and suppliers, said Michelle Oberman, a professor at Santa Clara University’s School of Law.

The abortion pill consists of two drugs, mifepristone and misoprostol. The Food and Drug Administration allowed the abortion pill to be mailed to patients during the pandemic, eventually making its decision permanent.

More than half of U.S. abortions used the abortion-pill method as of 2020, according to the Guttmacher Institute.

While banning medication abortion is unconstitutional, some states have restrictions in place. Many states require physicians to administer the pill or require a clinician to be physically present, while Indiana and Texas have banned it before the first trimester ends.

How will individual states be affected?

“Every state, up until 1972, had its own independent criminal provisions governing abortion. Some states by 1972 had repealed their laws and legalized abortion,” Oberman explained, while others had laws against abortion that sat on the books and were unenforceable after Roe v. Wade was enacted into law.

Now that Roe v. Wade has been overturned, there are 26 states that “are certain or likely to ban abortion,” according to the Guttmacher Institute.

Thirteen of these states — including Idaho, Kentucky and Texas — have what are known “trigger laws,” which will ban “all or nearly all abortions” almost immediately now that the decision is overturned.

Some states have “pre-Roe laws,” those that Oberman mentioned have never been removed. Others have “post-Roe restrictions,” blocked until now by the courts, that could go into effect.

More than a dozen states, including California, Illinois, New York and Washington, D.C., protect the right to an abortion.

States that don’t fall into either of the above categories — Alaska, New Mexico and New Hampshire among them — are in “the wait-and-see stage,” Oberman said. But that doesn’t mean all of them will take the same approach, she added.

“It’s more that they have enough of a diversity of opinion in their population that state lawmakers don’t necessarily come into power elected by a swath of the population who depend on their promises to criminalize abortion,” she said.

Oberman said that after a year, different state responses to abortion may emerge — we’ll see whether a state is “truly pro-life” and wants to encourage people to have children by offsetting the cost of child care, whether it may just want to make a statement about abortion by making it illegal, or whether it will try to prosecute as many people as possible.

“I have a feeling that the exuberance about recriminalizing abortion will be tempered over time by the reality that abortion doesn’t go away when it’s illegal,” Oberman said.

What are the economic ramifications?

The ruling stands to exacerbate wealth inequality in the United States.

People seeking abortions who were denied access were four times as likely to live below the federal poverty line compared to those who could access them, according to a 2018 analysis by Diana Greene Foster, a professor of obstetrics, gynecology and reproductive sciences at the University of California, San Francisco.

A 2020 University of Michigan study on the persistent nature of resulting “financial distress” found that people who were denied abortions experienced, in the five years that followed, a 78% increase in debt; an 81% increase in the likelihood of events like bankruptcy and eviction; and had weaker credit scores.

The demands of taking care of a child may also keep people out of the workforce or decrease their earnings potential.

The effect of the Supreme Court’s decision is likely to be especially disadvantageous to Black women, who disproportionately use abortion services in the South.

What about the abortion-provider workforce?

“Abortion providers face threats to their physical safety as well as their livelihoods. And we know that those threats have increased in recent years, even just between 2019 and 2020,” George Washington University’s Strasser said.

Strasser said that Texas was in the process of “empowering citizens to potentially attack abortion providers or sue them.” The state has created what U.S. Supreme Court Justice Sonia Sotomayor has called a system of “bounty hunters,” where residents can sue clinics, doctors and nurses for sums starting at $10,000.

Strasser said that state trigger laws may encourage abortion providers to move to states that have committed to protecting abortion rights. For physicians or advanced practice clinicians, Strasser said, such a move might be within reach; frontline workers in abortion facilities without the same economic freedom will have a harder time making that move and risk being left in a state that’s hostile to their occupation.

Strasser added that providers who offer abortion services are also equipped to handle miscarriage care and “may be scared to provide them because of fear of retribution.”

About 10% to 20% of pregnancies end in miscarriage, although that figure is likely higher since many miscarriages happen early in the pregnancy, according to the Mayo Clinic. The fewer abortion providers there are, the harder it will be to train future providers, Strasser said.

“In workforce research, we call that a pipeline problem,” she said.

How difficult will it be for people to travel for abortion access?

An abortion can cost up to $750 during the first trimester and up to $1,500 later in the pregnancy, according to Planned Parenthood. Your health insurance, the area you live in and the type of abortion all play a role in the final cost.

“Having to travel out of state is a huge barrier to getting care,” Strasser said. “And we know that it is particularly onerous on people who are lower-income, for whom the additional burden of even $50 or $100 might be prohibitive.”

There are travel, lodging and child care costs to take into consideration, along with wages lost from missing work.

Because abortions are more expensive in the later stages of pregnancy, Strasser pointed out that the longer people have to wait for a procedure — especially if they have to arrange travel across states —  the more expensive it will become.

Several companies have announced that they’ll pay the travel costs involved. The startup Alloy said it will provide up to $1,500 in traveling expenses for an employee, or their partner, and will also help with legal and out-of-network costs.

Other companies with similar pledges include Yelp, Citigroup and Amazon, which will provide up to $4,000 in travel expenses for workers enrolled in employer-provided health care plans.

However, most who have made these announcements are big, publicly traded entities in the finance and tech sectors; workers in other lines of work may not have similar advantages. On top of that, Amazon’s reimbursement will only apply to U.S. employees “who are enrolled in employer-provided health care plans,” which will leave out vulnerable workers like delivery drivers, reported Vice.

Now that people will need more assistance to travel outside of their region, that’s going to create challenges for abortion funds, said Mary Ziegler, a visiting professor at Harvard Law School.

Ziegler said the Hyde Amendment prevents federal funding for abortion, which is why these funds are crucial for helping people afford the cost of one.

Both national and local funds said they experienced an uptick in donations after the draft of the Supreme Court opinion on abortion leaked last month.

Even then, Strasser warned: “There’s essentially no amount of money that could be raised reasonably that would overcome the loss of Roe.”

Clarification (June 24, 2022): This story has been updated with details on how Supreme Court justices voted.

Correction (June 24, 2022): A previous version of this story misstated the types of resources that companies say they will allocate to help employees seeking an abortion.