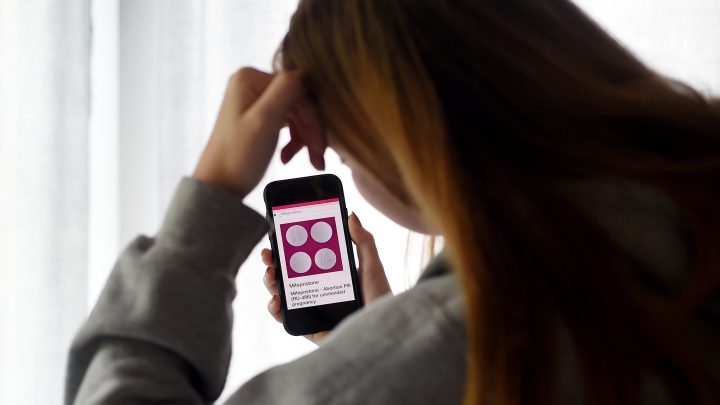 More than half of the abortions in the U.S. are induced through the use of medication, according to the Guttmacher Institute. The procedure is allowed by the Food and Drug Administration in the first 10 weeks of pregnancy, and during the pandemic, the agency stopped requiring that patients obtain the medication in person.

Businesses popped up to help patients meet with providers virtually and get the drugs by mail. If the Supreme Court does repeal Roe v. Wade, those businesses will face an entirely new landscape.

The FDA approved medication abortion in 2000, and abortion-rights advocates say that’s a major difference from where we were before Roe v. Wade became law in 1973.

“Unlike back in 1972, in 2022 we do have safe and effective medications that put the power back into people’s hands,” said Kiki Freedman, the co-founder and CEO of Hey Jane, a digital clinic for medication abortion.

At Hey Jane, a patient can fill out a medical intake form online, get in touch with a provider and have drugs to end a pregnancy mailed to them.

“So we’re in New York, California, Washington, Illinois, New Mexico, Colorado. We picked states that account for 52% of abortion volume nationwide, but also those that are most likely to receive a lot of patients traveling in a post-Roe world,” she said.

If patients can’t travel to a state where a provider like Hey Jane is operating, they may try to get medication through mail forwarding, said Elisa Wells, co-director at Plan C, which provides information about accessing medication abortion.

“So we know people are using virtual mailbox services, getting an address, doing a telehealth consultation, and then having the pills shipped to the virtual mailbox and then forwarding it to themselves in the states where they live,” Wells said.

There could be legal risks in all of this for both patients and providers like Hey Jane.

Rachel Rebouche is interim dean at Temple University’s law school. “If you’re providing web-based services, can a state go after you as a provider if you mistakenly provide an abortion to someone in Texas that doesn’t allow telehealth for abortion?” she asked.

Another open question, according to Rebouche, is whether states will attempt to punish the makers of abortion drugs as well.