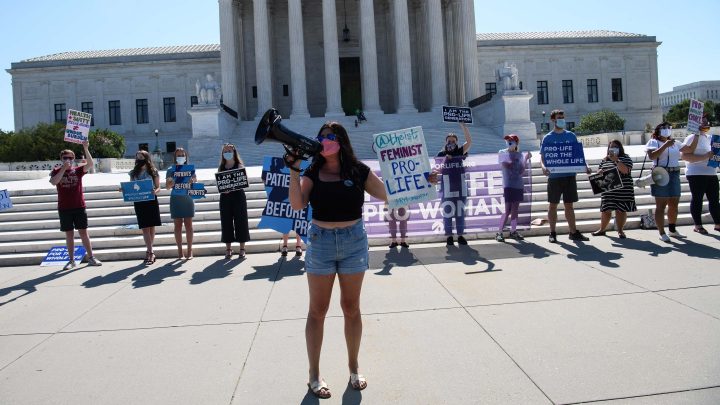 Antiabortion activists demonstrate in front of the Supreme Court in Washington, D.C., on Monday. The court rejected a Louisiana abortion curb in a key victory for abortion rights activists. Nicholas Kamm/AFP via Getty Images

Antiabortion activists demonstrate in front of the Supreme Court in Washington, D.C., on Monday. The court rejected a Louisiana abortion curb in a key victory for abortion rights activists. Nicholas Kamm/AFP via Getty Images

The Supreme Court has struck down a Louisiana law that likely would have made it more difficult for women in the state to find an abortion clinic.

The 2014 law required doctors who perform abortions to have admitting privileges at nearby hospitals, which the court ruled unconstitutional in a 5-4 vote. Chief Justice John Roberts sided with the court’s four liberal justices.

These privileges grant a physician the ability “to admit patients to a particular hospital, and to provide specific services in that facility,” Kaiser Health News wrote. Many hospitals require physicians to admit a minimum number of patients, which can be difficult for abortion providers since few of their patients need hospital care.

The Supreme Court struck down a similar law in Texas in 2016, which had also required doctors who performed abortions to have admitting privileges. The court’s decision in that case influenced Roberts’ decision Monday.

“The Louisiana law imposes a burden on access to abortion just as severe as that imposed by the Texas law, for the same reasons. Therefore Louisiana’s law cannot stand under our precedents,” Roberts wrote.

The law was expected to leave the state, which currently has three abortion clinics, with only one clinic. The locations of these facilities already impose financial burdens on women who may have to travel hundreds of miles to reach one.

Almost half of the women in Louisiana have to travel more than 50 miles to reach a clinic that provides abortions, according to the University of California, San Francisco’s research group Advancing New Standards in Reproductive Health. Patients are required to make two visits to a clinic for an abortion, which can amount to two 100-mile trips, said Dr. Sarah Roberts, an associate professor at the University of California, San Francisco, who is part of ANSIRH.

If the law did go into effect, a majority of women would have to travel over 150 miles each way for an abortion, according to ANSIRH.

“Research shows that people face significant barriers to abortion care in Louisiana — and that’s particularly the case for people who are struggling financially,” Roberts said.

Quita Tinsley, deputy director of Access Reproductive Care – Southeast, said the costs might include lodging and gasoline — in some cases, even bus travel or flight. These costs can vary widely, of course, but Tinsley said they can range from $50 to $75 if you’re only paying for gas and up to $300 or $400 if you’re covering gas, food and lodging.

“When we’re talking about who is it easiest for, it’s definitely people who have higher income. People who, potentially, their insurance is able to cover their procedure. People who are able to see their private doctors for care,” Tinsley said.

Other financial barriers include the fee for the abortion itself, which UC San Francisco’s Roberts said can cost more than $500 on average in the first trimester of pregnancy. On top of that, people may need to take time off from work and pay extra for child care. Also, Medicaid does not cover abortion in Louisiana.

“So low-income folks and folks who are on their state Medicaid programs are automatically having to pay out of pocket,” Tinsley said.

In her own research based on a nationwide sample, Roberts found that about half of patients have to pay more than one-third of their monthly income out of pocket to obtain an abortion.

“And that’s just the people who are able to get abortions,” she said. “People will often have to forgo doing things like paying rent or paying other bills in order to come up with the money.”

Correction (June 30, 2020): An earlier version of this story misidentified the source that determined how long it takes women in Louisiana to reach an abortion clinic.