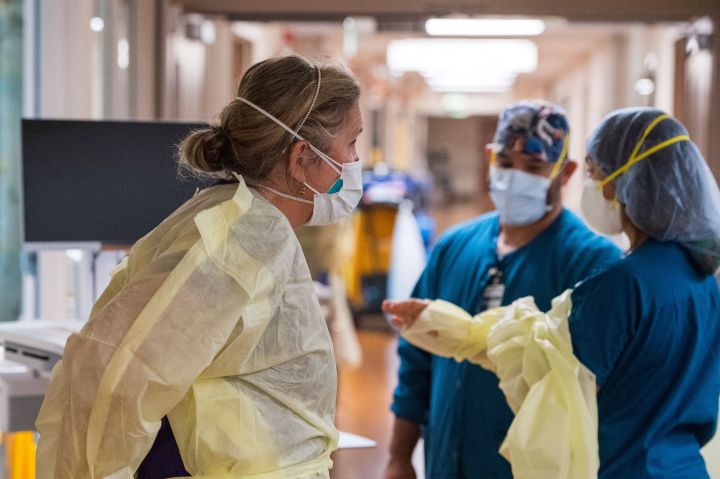 While abortion has been, or is expected to be, banned or severely restricted in more than half of the states this country, others are going in the opposite direction and working to increase access. One way they’re doing that is by expanding the workforce. On Friday, a law takes effect in Maryland that will allow qualified health care providers in addition to physicians to perform abortions, including physician assistants, nurse practitioners and nurse midwives.

“My first reaction was: finally,” said Erin Wright, a certified nurse-midwife who practices in Maryland. “Because these are skill sets that are not difficult to learn. We really already have them.”

Wright has her doctorate in nursing practice and delivers babies at Johns Hopkins Hospital in Baltimore. She is also a professor at the Johns Hopkins University School of Nursing and said she knows she’s capable of performing early abortions.

“Early abortion care is medication abortion,” Wright said. “It’s the same prescription that we often would write if somebody had an early pregnancy loss.”

“According to the American College of Nurse-Midwives, midwives have the ability to do manual vacuum extractions, which is suction,” Wright said. “It’s no more difficult than inserting an IUD, which is something that we do every single day.”

Wright said Maryland’s law is important now, because there already aren’t enough providers here to meet the demand, which is expected to increase.

“We are one of the southernmost states on the Eastern Seaboard that actually is not only providing but expanding access to abortion care. So we are about to see a big influx of people from other states who are going to require these services,” Wright said.

In anticipation of that influx, another certified nurse-midwife, Morgan Nuzzo, is partnering with a physician to open what they call an all-trimester abortion clinic in College Park, Maryland, called Partners in Abortion Care.

“We got the keys on Wednesday, and we started renovations on Thursday, and we hope to open in the fall,” Nuzzo said.

Nuzzo’s team is buying their equipment from a clinic that’s closing in Savannah, Georgia.

Under specific circumstances, Maryland allows abortions relatively late in pregnancy, into the third trimester, and this will be one of only a handful of clinics in the country that offers that.

“A lot of our patients that come either have a bad fetal diagnosis or some sort of life-threatening situation where they’re usually flying from somewhere else in the country to get to us,” Nuzzo said.

Nuzzo said Maryland’s new law was instrumental in the decision to locate the clinic in the state.

By the end of the year, 19 states and Washington, D.C., will allow these advanced-practice clinicians, in addition to physicians, to perform abortions, according to the Guttmacher Institute, a reproductive health policy organization.

“That’s very uncommon,” said Elizabeth Nash, a state policy analyst with Guttmacher. “I don’t know of another state that has a line item for abortion training.”

Some are critical of the job expansion, including Laura Bogley, legislative director for Maryland Right to Life. She said the new law promotes what she called “abortion tourism.”

“Maryland abortion law is regressive at this point. We’re going in the wrong direction. We’re not ensuring that abortions are safe. We’re reducing that standard of care,” Bogley said.

Maryland’s governor, Republican Larry Hogan, vetoed the bill on similar grounds. That veto was overridden by the state legislature.

“It repealed one of the few health and safety regulations on abortion practices that the state of Maryland was allowing that require only licensed physicians to perform abortions,” Bogley said.

At Johns Hopkins, certified nurse-midwife Erin Wright points out abortion procedures have advanced since Maryland passed the law in the early ’90s stipulating that only physicians perform them.

“The previous laws went in place before there was such a thing as medication abortion, and most things really were surgical. That is not the case anymore and hasn’t been for a long time,” Wright said.

Wright was at the hospital last Friday when the Supreme Court overturned Roe v. Wade.

“I was actually on labor and delivery when the news came out,” Wright said. “Everybody became very quiet for a moment. And then we all just got to work. Because that is our job, is to get to work taking care of patients.”

Wright said as a midwife, it’s her responsibility to take care of anyone with a uterus. That can include delivering babies, performing a gynecological exam or prescribing birth control. Now, she’s preparing for a future where her job could include performing abortions.