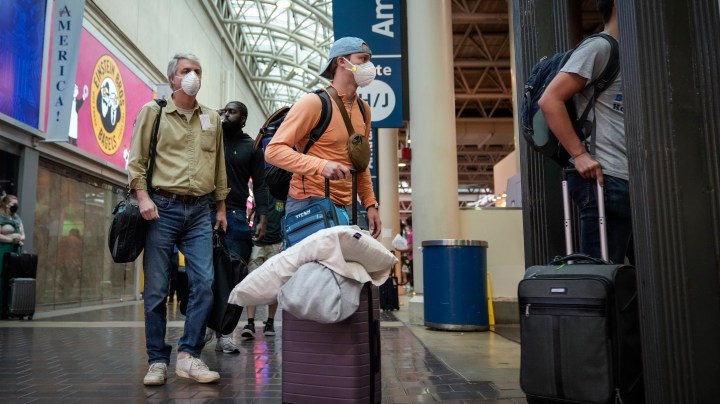 COPY
Travelers board a train in Washington, D.C. Partially fueled by pent-up demand for services, consumers are spending down their savings. Drew Angerer/Getty Images

Travelers board a train in Washington, D.C. Partially fueled by pent-up demand for services, consumers are spending down their savings. Drew Angerer/Getty Images
Listen Now

At one point during the height of the pandemic, Americans were saving 34% of their disposable income. As of April, they were saving just 4.4%. That’s to be expected, sure, but given that inflation is still coming in hot, it means that the economic cushion some folks built up over the past few years is losing some of its stuffing.

The wild thing is, though, a lot of people are still spending.

Kevin Barry hadn’t taken a long vacation in, well … ever, he said. But he decided to not only take a vacation this year — he’s taking his bucket list vacation.

“I came to Paris after a work trip to take cooking lessons,” he said.

Barry said he’s been saving up, and he’s using the money. “I’m 42. Ever since I graduated college, there’s been waves of recession. And so I guess my thinking is that we just gotta do the best we can to prepare for it, but we can’t live in economic fear.”

“The savings rate recently in the past few months has dropped below its pre-pandemic trend,” said Kayla Bruun, an economic analyst at Morning Consult.

After peaking in 2020, the savings rate (while still high) has been coming down in fits and starts, with consumers spending that money on homes, furniture and other goods.

But that’s not all terrible, he added. Rising credit card debt can be a sign of confidence in the economy.

But if inflation is going to be controlled, consumer spending is most likely going to slow down. So now that we are saving less, we may eventually cool our spending too.