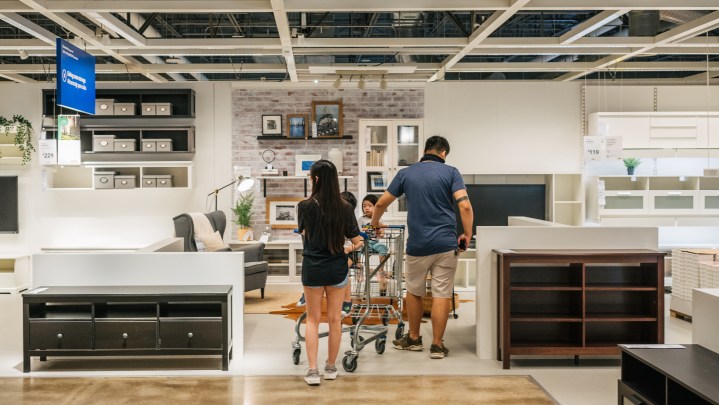 COPY
Consumers are still spending on big-ticket, durable goods like furniture. But now demand for services is picking up again. Brandon Bell/Getty Images

Remember how during the worst of the pandemic, when we couldn’t go out, we bought a lot of stuff instead? That stressed supply chains and helped drive inflation. Over the past couple of weeks, there have been signs that the pandemic shopping spree may be cooling down.

That’s because the giant economic pendulum at the heart of our economy — consumers, that is — is swinging back toward spending on services.

Earlier in the pandemic, consumers across America swerved toward goods. Take George Hinchliffe, an IT worker in Seattle, as an example: “During the pandemic, I got a house.”

And he’s been slowly filling that house with stuff, “mainly furniture,” Hinchliffe said.

By the spring of 2021, the United States was consuming a third more durable goods than it had just before the pandemic, according to Kathy Bostjancic, chief U.S. economist at Oxford Economics.

“And that puts enormous strains on the system,” said Phil Levy, chief economist at Flexport. He said spending is starting to change, especially with nondurable goods — the perishable stuff you don’t keep for long. “Nondurable goods have started to behave like they did pre-pandemic.”

But durable goods, those big-ticket items like the air conditioners, the refrigerators, the furniture? “Durables demand is still looking strong and continuing,” Levy said.

Meanwhile, people want to get outside and do stuff — not just buy stuff. Airtravel bookings surged earlier in the year, according to Adobe Digital Insights. Consumers are finally spending as much on services as they did pre-pandemic, according to Bostjancic of Oxford Economics.

“For now, consumers are still spending on goods, but they’re also spending more on services relative to what they were spending previously,” Bostjancic said.

Theoretically, less demand for stuff and more demand for services should help with everything from supply chains to inflation, but there’s a “but.”

“It takes the heat off goods prices, but it does help to fuel higher service prices,” Bostjancic said.

Exhibit A: flight prices. George Hinchliffe traveled from Seattle to North Carolina for his grandma’s birthday. “I literally paid more for this flight than I’ve paid for international, long-haul flights to other countries,” he said.

Oxford Economics’ Bostjancic said this rebalancing between goods and services in the American economy is only just getting started.