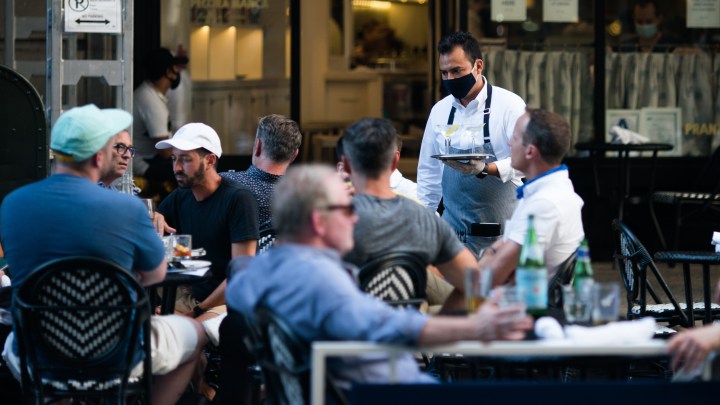 COPY
Now that they're out of the house, consumers are spending money on things like travel and dining out — despite their rising costs. Jeenah Moon/Getty Images

Now that they're out of the house, consumers are spending money on things like travel and dining out — despite their rising costs. Jeenah Moon/Getty Images
Listen Now

We’ll get a sense of how consumers have been spending their money later this week, when the Commerce Department releases its personal consumption expenditures index for the month of April.

Big retailers including Target, Walmart and Best Buy have been reporting that consumers have been spending less on goods and more on services — echoing a refrain we’ve been hearing for a while now.

Spending on goods jumped at the start of this year, but it’s been falling ever since.

“What we are seeing now is probably people holding back because either, a) because of higher prices or b) they’re waiting until they can start seeing more supply come online,” said Jennifer Lee, senior economist at the Bank of Montreal.

On the other hand, spending on services like travel and going out to eat has been steadily increasing for most of the last year, according to the Commerce Department.

“We’re really just kind of in the early stages of that shift. And it’s going to pick up steam, we think,” said Kathy Bostjancic at Oxford Economics.

Many people already bought all the TVs and household goods they need, she said. Now, they want to get out of the house and even though prices are rising, consumers can afford to spend money.

“The labor market is still very strong, and there’s still a big pile of savings on the household balance sheet,” said Bostjancic.