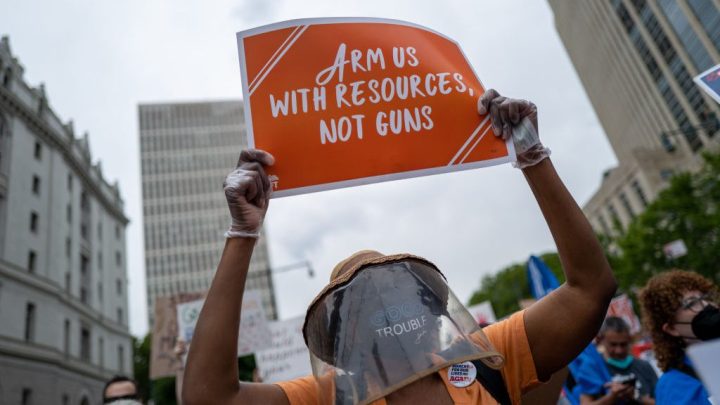 COPY
An activist at the March for Our Lives demonstration Saturday in New York City. Spencer Platt/Getty Images

An activist at the March for Our Lives demonstration Saturday in New York City. Spencer Platt/Getty Images
Listen Now

On Sunday, a bipartisan group of 20 senators announced a legislative framework that, if passed, could become the largest federal gun control law in 28 years. While the framework addresses lots of issues, background checks are an area with room for improvement.

“This framework touches on two pieces that I think are relevant for background checks,” said Cassandra Crifasi, professor and deputy director at the Johns Hopkins Center for Gun Violence Solutions. According to Crifasi, the framework better defines what a licensed dealer is, “which is really important because under federal law, you’re only required to undergo a background check if you buy a gun from a licensed dealer.”

The second piece? “An enhanced background check for people under the age of 21 who are buying guns,” Crifasi said in an interview with “Marketplace” host Kimberly Adams. “This involves an investigative period to look at criminal history and mental health records and is facilitated by state and local records that might not yet have been reported into the federal system.”

That doesn’t mean there isn’t more the framework could do. In particular, it doesn’t address the “default proceed” loophole, which allows a gun sale to proceed even if the background check isn’t completed in the mandated time. “The senators decided to not address the three days that are allowed for law enforcement to conduct a background check and move it to 10,” Crifasi said. “They decided to keep it at three, which is, I think, a real missed opportunity.”

To listen to the full interview, use the media player above.