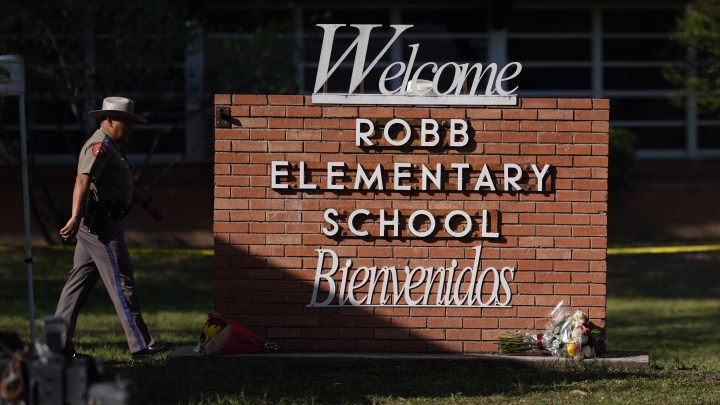 COPY
An officer walks outside of Robb Elementary School on May 25. The day before, a gunman killed 19 students and two adults. Allison Dinner/AFP via Getty Images

An officer walks outside of Robb Elementary School on May 25. The day before, a gunman killed 19 students and two adults. Allison Dinner/AFP via Getty Images
Listen Now

On May 24, a gunman killed 19 children and two adults in a shooting at an elementary school in Uvalde, Texas. Since 2018, there have been 119 school shootings, according to Education Week, and 27 so far in 2022.

Each mass shooting is a senseless, incomprehensible tragedy. And guns are a multibillion-dollar business in America.

Today, we’re revisiting a segment of a 2013 story that explores background checks and gun purchases. The story, by David Gura, ran in February of that year in response to the Sandy Hook Elementary School shooting in Newtown, Connecticut. There, on Dec. 14, 2012, a gunman killed 20 children and six adults.

Since then, Congress has yet to pass a new background check law or gun safety law. New laws on the sale of firearms, where they exist, have been passed state by state. Nothing has changed at the federal level in the sale or regulation of guns since.

Since the school shooting in Newtown, Connecticut, lawmakers have been revisiting the issue of background checks for gun buyers, debating what information you should have to give the government to buy a gun, and what the government should be able to do with that information. There’s that old saying, “Follow the money.” I decided to follow the guns. Or try to.

Arthur has to write down the type of gun — the make and model and the serial number. Then, he calls the FBI’s Criminal Justice Information Services Division, in Clarksburg, West Virginia, and he gives them only the most basic information: name, address, driver’s license number.

That form, the 4473, won’t go anywhere. By law, Arthur has to hold onto it for 20 years. That means the FBI doesn’t have anything close to a complete record of what guns are sold.