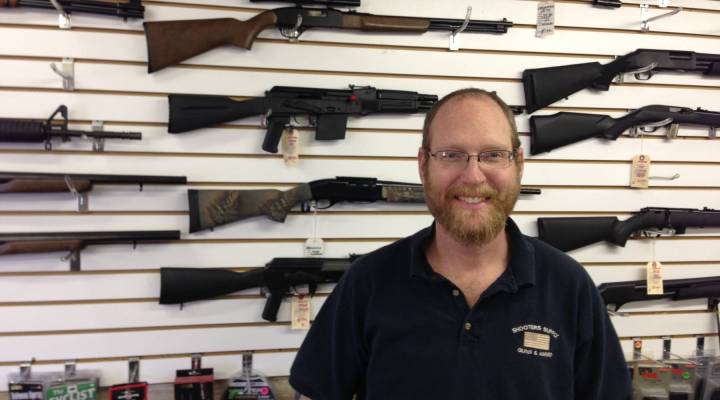 COPY
In most states, background checks at a gun store can take a few minutes. In Maryland, checks for buyers of semiautomatic weapons are much stricter. Bob Arthur owns Shooters Supply in Berlin, Md. David Gura
Guns and dollars

In most states, background checks at a gun store can take a few minutes. In Maryland, checks for buyers of semiautomatic weapons are much stricter. Bob Arthur owns Shooters Supply in Berlin, Md. David Gura
Listen Now

Since the school shooting in Newtown, Connecticut, lawmakers have been revisiting the issue of background checks for gun buyers, debating what information you should have to give the government to buy a gun, and what the government should be able to do with that information. There’s that old saying, “Follow the money.” I decided to follow the guns. Or try to.

Arthur has to write down the type of gun — the make and model and the serial number. Then, he calls the FBI’s Criminal Justice Information Services Division, in Clarksburg, West Virginia, and he gives them only the most basic information: name, address, driver’s license number.

That form, the 4473, won’t go anywhere. By law, Arthur has to hold onto it for 20 years. That means, the FBI doesn’t have anything close to a complete record of what guns are sold.

If that shotgun were used in a crime, here’s what would happen:

In most states, that’s it. That’s the background check.

But this is Maryland, and say you want to buy a semi-automatic, like the AK-47 on the wall, or the Colt Officer’s Model in the glass case. That would require additional paperwork.

First, you need to show Arthur your certificate from a firearms safety training course. (You can take one online in 30 minutes.) Then, there’s a form that lets the Maryland State Police check for any record of a mental disorder or violent behavior.

On another form, you have to list current and past employers, and three personal references. And the state does keep track of what you buy.

According to Arthur, “They get the make, the caliber, the type, the finish, the barrel length, the model, the serial number, and what country of origin it was from.”

You do this in quadruplicate. Arthur mails one copy to Maryland State Police Headquarters.

State Police Headquarters is in Pikesville, outside of Baltimore. The Licensing Division is across the street. Sgt. Marc Black says he can’t take me inside, but he can tell me what happens here.

Several investigators go through applications, checking 16 databases. By law, the State Police have seven days to do this. But according to Black, investigators have been “extremely busy.”

“There is an increase in applications for firearms,” he says. “We are working around the clock to take care of those increases.”

If Bob Arthur doesn’t hear back from the State Police after seven days, Maryland law says he and the customer don’t have to wait any longer. He can hand over that Colt pistol.

Now, keep in mind that, in most states, everything I have just described only applies to gun sales by licensed dealers. If you buy a firearm from someone else — a friend, someone you met online, odds are there would be no background check, no paperwork, and no record a transaction took place.

Advocates for universal background checks say they would ensure fewer guns end up in the hands of people who shouldn’t have them, and more data would make it easier for law enforcement to trace how criminals get guns.

“If we retained centralized information, even if just on the gun itself, then ATF could follow the gun, not the purchasers — no personal identification is given up here, from that first retail purchaser through the most-recent retail purchaser,” Garen Wintemute says. He heads the violence prevention research program at UC Davis.

That is possible under state law in California, where Wintemute lives. But that is not possible nationwide.