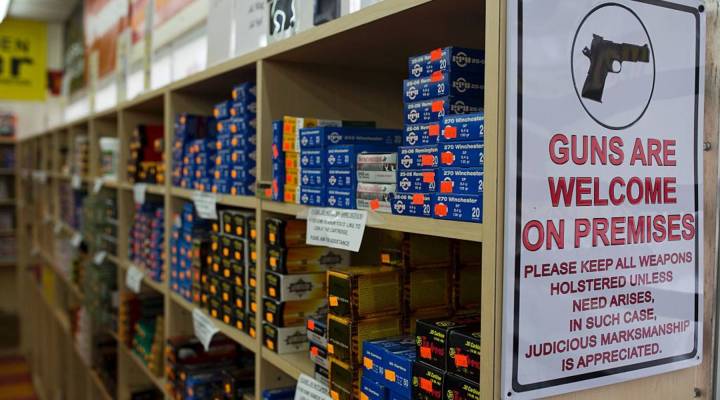 The proprietor of this Merrimack, New Hampshire, gun store said his October 2016 sales were double that of 2015, with customers expressing anxiety about the November election. DOMINICK REUTER/AFP/Getty Images

The proprietor of this Merrimack, New Hampshire, gun store said his October 2016 sales were double that of 2015, with customers expressing anxiety about the November election. DOMINICK REUTER/AFP/Getty Images

Donald Trump’s presidency might have put a damper on gun manufacturer stocks, but Sturm Ruger CEO Michael Fifer believes that the slump in demand is only temporary. His reasoning? Gun ownership is becoming more socially acceptable.

“I doubt that the new normal will be materially lower than where we were going before,” Fifer said today during an earnings call. “It appears to me that if you look over multiple years that there is wider acceptance of guns, wider availability. There’s more exciting new products from all the competitors, not just Sturm Ruger. There is more reasons now to have guns than ever before.”

Having had the time to adjust to the new president, the sales and demand for firearms will soon normalize, according to Fifer, who heads the largest gun manufacturer in the country.

Gun manufacturers saw eight years of increasing sales during President Barack Obama’s administration, thanks to gun enthusiasts who were afraid Obama would make it harder for them to buy guns. Sturm Ruger’s total net sales went from $181 million in 2008, the year before Obama took office, to $664 million in 2016. But the industry expected demand to decrease under Trump, who has been outspoken during his campaign about his support of the Second Amendment and gun owner rights.

Fifer said he does not foresee demand dropping off too much, considering that Americans who take up shooting as a hobby tend to purchase multiple firearms.

“Many, many, many new shooters have come on [to the market] in the last eight years that are now buying their second or third or their 10th gun, and I think that the market is substantially different than pre-Obama,” Fifer. He is right in that about 1-in-5 gun owners have a collection of 10 or more guns. Yet, data show that gun ownership has dropped to the lowest that it has been in about 40 years, with just 36 percent of Americans owning a gun or living with someone who does.

Gun sales soared at the end of 2015 when lawmakers renewed their push for gun control after a Dec. 2 shooting in San Bernardino left 14 dead and 22 injured. Some industry analysts have said that the desire to protect oneself is one of the reasons why gun sales soar after mass shootings.

Throughout his eight-year tenure, Obama repeatedly called on Congress to pass stricter gun control laws, which at times resulted in higher gun sales. When Obama took office in January 2009, Sturm Ruger shares traded at about $6.50 a share. By the time he left, that number was closer to $50.50 a share.

Former Secretary of State Hillary Clinton was expected to also push for stricter gun control laws. In August of last year, Fifer said Clinton, whom he described as having “a very real likelihood of winning the presidency,” was “actively campaigning against the lawful commerce in arms.”

Expecting a Clinton victory, gun retailers had stocked up on rifles as the election neared.

“We observed retailers committing inventory dollars to certain product categories, such as modern sporting rifles, which likely would have been in stronger demand if the election had turned out differently, given that relative vulnerability to legislative action,” said Chris Killoy, current president and chief operating officer at Sturm Ruger, during the earnings call. Killoy is expected to take over as CEO later this year when Fifer steps down from the post.

Purchases of concealed carry products also rose in the weeks leading up to the election, Killoy said.

Yet come Nov. 8, it was Trump who claimed victory, not Clinton. According to Killoy, foot traffic at retail stores slowed down in mid-December when people began to “moderate their behavior.”

Fifer expects demand and sales to return to “normal” in the near future.

“We have seen this story before wherever you get a big, politically driven spike,” he said. “They tend to be fairly short, and they are followed by a decline in demand for a while, and then everything returns to what I call normal. You got the same actors driving interest: You have got more concealed and carry in more states, you have got more new shooters coming along. Generally, it’s more socially acceptable to admit to your friends that you actually like guns and enjoy having them — ‘By the way, come look at the newest one I just bought, let me show it to you’. All that stuff drives demand.”

As to what Fifer expects firearms sales to be in 2017, he said: “We don’t make estimates. As we all learned back in November, no one can forecast the future.”