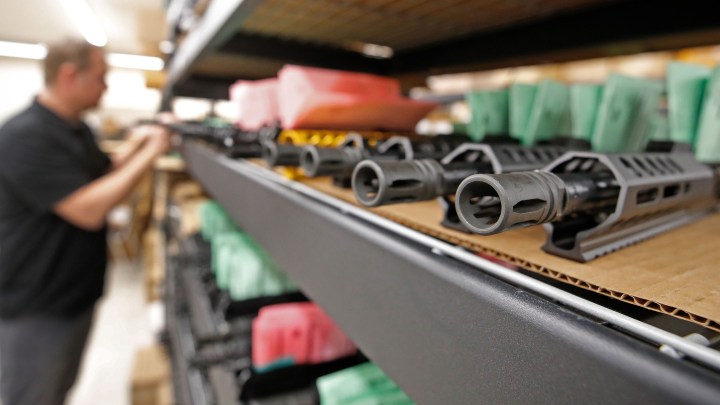 COPY
Background checks at licensed gun dealers are up for the third month in a row, and they’re up a lot. George Frey/AFP via Getty Images

Background checks at licensed gun dealers are up for the third month in a row, and they’re up a lot. George Frey/AFP via Getty Images
Listen Now

Investment in firearms companies is on the rise. The stock price of, for instance, Sturm, Ruger & Co., was up 14% for the week heading into Wednesday’s market open. That stock is up more than 35% over the last three months.

Beyond the stock market bet, background checks for new firearms are way up, too. Marketplace’s Nova Safo has the story.

He spoke with “Marketplace Morning Report” host David Brancaccio, the following is an edited transcript of their conversation.

David Brancaccio: Do we know how many guns are being sold?

Nova Safo: Not exactly. What we know for certain is background checks at licensed gun dealers are up for the third month in a row, and they’re up a lot — 75% in May alone on a year-over-year basis. April and March had similar spikes.

But that doesn’t necessarily mean we know how many guns are actually being sold. Here’s UCLA law professor Adam Winkler, who studies gun policy:

Brancaccio: Presumably, we can guess what’s driving these sales, between COVID-19 and the protests, is a lot of anxiety out there?

Safo: A lot of anxiety. Also, some analysts believe people are worried Democrats will do well in the November election, so there could be more regulation coming.

But Winkler doesn’t buy that:

“That surge in gun demand is really being driven by the COVID crisis and the recent looting. People, when they fear that the environment is one in which they’re in danger, they want to have a gun.”

The surge could also be due to pent-up demand. People were sheltering at home, and now they can go out and make purchases.