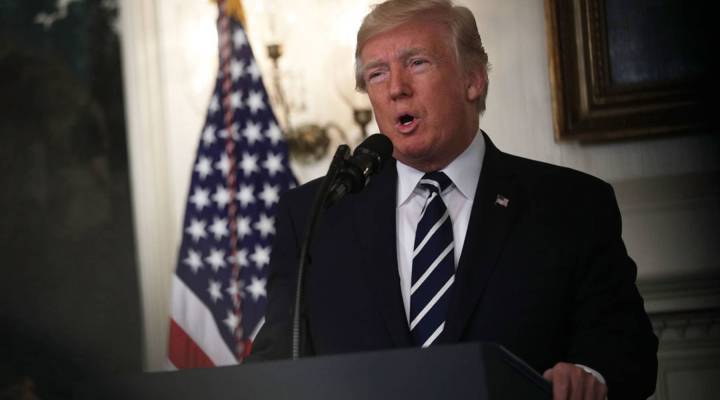 COPY
President Donald Trump makes a statement on the Las Vegas mass shooting. The gunman, identified as Stephen Paddock, 64, of Mesquite, Nevada, opened fire from the Mandalay Bay Resort and Casino on the music festival, leaving at least 58 people dead and hundreds injured. Police have confirmed that one suspect is dead. The investigation is ongoing. Alex Wong/Getty Images

President Donald Trump makes a statement on the Las Vegas mass shooting. The gunman, identified as Stephen Paddock, 64, of Mesquite, Nevada, opened fire from the Mandalay Bay Resort and Casino on the music festival, leaving at least 58 people dead and hundreds injured. Police have confirmed that one suspect is dead. The investigation is ongoing. Alex Wong/Getty Images
Listen Now

Stocks of U.S. gun manufacturers spiked on Monday morning, just hours after the most deadly mass shooting in recent history. At least 58 people were killed and more than 500 were wounded on Sunday night when Stephen Paddock, 64, opened fire at the Route 91 Harvest Music Festival in Las Vegas from the 32nd floor of the Mandalay Bay Hotel.

Paddock was found dead in his hotel room with as many as 10 firearms, officials said on Monday morning. Concert-goers reported hearing what they described as automatic gun fire during the shooting.

This is not the first time that a mass shooting has resulted in such a spike.

“Over the past eight and a half years, you had this volatile situation where every time there’s some sort of mass shooting, like Newtown, like Orlando, and now like Las Vegas, the stocks have gone up,” said Rob Cox, global editor at Reuters Breakingviews. “Largely in response to concerns there may be new tightening of regulations on buying the guns, or on gun ownership. And that has actually driven a lot of the buying that actually has given these guys a lift over the past eight years.”

Last year, after more than 49 people were killed and dozen were wounded in a shooting at Pulse, a gay nightclub in Orlando, Florida, U.S. gun manufacturers saw their shares go up by 6 to 8 percent.

“This massacre is a further reminder of how easy it is for someone to get their hands on a weapon that allows them to shoot people,” President Barack Obama said at the time.

When President Donald Trump addressed the nation on Monday morning from the White House, he did not mention gun control or access to guns in America.

“It was an act of pure evil,” Trump said about the shooting. He went on to say that he and the first lady are praying for the speedy recovery of those injured and called on the U.S. to come together as one. “I know we are searching for some kind of meaning in the chaos, some kind of light in the darkness. The answers do not come easy.”

The president will travel to Las Vegas on Wednesday where he will meet with first responders, law enforcement officials and the families of the victims.

While campaigning for president, Trump promised to defend Americans’ right to bear arms and even appeared at the National Rifle Association’s convention in April of last year.

“I am going to come through for you,” Trump said at the time.

The NRA backed Trump in the election and spent more than $30 million to support his campaign.

“We have Donald Trump in the White House, who is a — he’s called himself a friend of the NRA,” Cox pointed out. “He spoke to their convention, the first sitting president to do so in about 30 years. So it’s unlikely to my mind that you’re going to see new restrictions come out of this — whether it’s on U.S. sales or sales abroad.”

Earlier this month, U.S. gun manufacturers saw their stocks spike when Reuters reported that the administration was working on a new rule that would make it easier for American gun makers to sell small arms, including assault rifles and ammunition, to foreign buyers. The proposed rule was designed to help U.S. gun manufacturers compete overseas. So far, under President Trump, gun manufacturers have seen their sales drop.

After Sunday night’s shooting, the White House might be reluctant to loosen existing gun control laws, said Cox. “What you probably won’t see are new relaxations on rules,” he said.

Despite the drop off in background checks, gun manufacturers have remained optimistic.

“I doubt that the new normal will be materially lower than where we were going before,” Sturm Ruger CEO Michael Fifer said in February. “It appears to me that if you look over multiple years that there is wider acceptance of guns, wider availability. There’s more exciting new products from all the competitors, not just Sturm Ruger. There is more reasons now to have guns than ever before.”