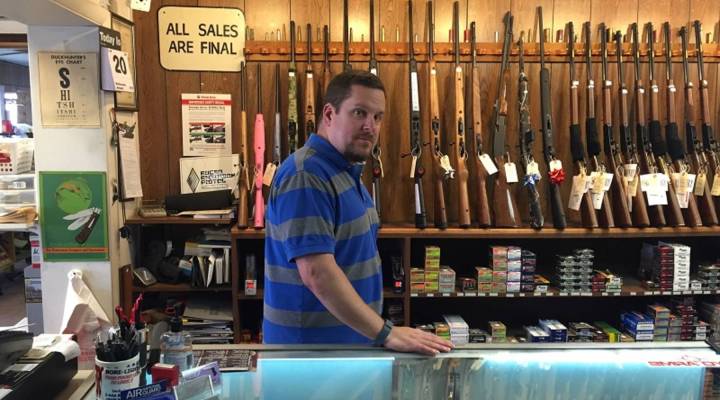 Before you can buy a gun at Frontier Arms in Cheyenne, you have to fill out Form 4473.  It asks questions like “Are you a fugitive from justice?” and “Have you ever been convicted in any court of a felony?” Owner Ryan Allen said, for most questions, there’s no use lying.

“In questions [where] we are talking about an actual crime, it’s going to come up,” Allen said. “There are no if, ands, or buts about that.”

That law also bans people who have been involuntarily committed to a mental institution, or found “mentally defective” by a legal authority, from buying guns. But Wyoming  does not submit mental health records to the background check system. That means that gun sellers like Ryan Allen have no way of knowing  if a customer is legally barred from purchasing a firearm for mental health reasons. Allen said that loophole could put the reputation of Wyoming’s gun culture in jeopardy.

“For someone like myself, the Second Amendment is so very important,” Allen said. “Especially in Wyoming. ownership of firearms is just a huge part of the culture. To protect that culture I would think it would be very important to make sure that we are not allowing people who are mentally ill or sick to be able to purchase firearms.”

As of last June, Wyoming — along with Alaska, Montana, New Hampshire, Oklahoma, and Vermont — had submitted fewer  than 100 records of people deemed dangerously mentally ill to the background check system since it was created in the 1990s, according to FBI data. The federal government recently announced new rules clarifying that states aren’t violating patient privacy when they submit mental health records to the federal background check system. But it does not force states to submit these records, and Wyoming officials say they can’t until state law changes.

Wyoming State Sen. Curt Meier opposed  a 2014 bill that would have made that change. He said he is worried that even this kind of record sharing with the federal government could lead to a weakening of Second Amendment rights.

“If you send information back there, whether it’s for mental health or whether it’s for any other reason, that they have a start on developing a national database for gun registration,” he said.

William Rosen said this kind of worry over submitting mental health records  is unwarranted. Rosen is council with Everytown for Gun Safety, a group that works to end gun violence. “It should be the least controversial thing that you can imagine,” he said.

Rosen said gun rights advocates want to focus on mental health and enforcing existing laws, and this does that. The number of states that have submitted fewer  than 100 mental health records to the background check system has fallen from 23 in 2011, to six by 2015, according to Rosen’s group. Rosen said he’s optimistic that this kind of record sharing will keep growing.

A proposal to encourage submitting mental health records has even been supported by the National Rifle Association.

“If there is one thing we can agree on,” Rosen said, “it’s that the small number of people in this country that are dangerously mentally ill should not have easy access to firearms.”

But for now there isn’t consensus. And in Wyoming, there’s no sign the law will change anytime soon.