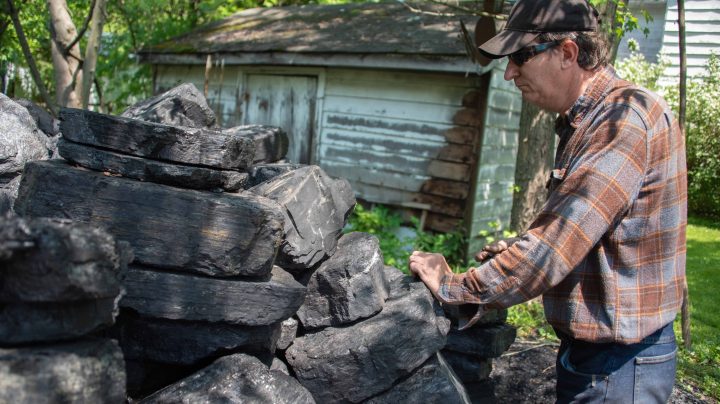 COPY
David Byrd looks out over a large pile of coal in his backyard. He sells the pieces to customers for heating or to blacksmiths who need a higher quality than what power plants typically use. Justin Hicks/Louisville Public Media

David Byrd looks out over a large pile of coal in his backyard. He sells the pieces to customers for heating or to blacksmiths who need a higher quality than what power plants typically use. Justin Hicks/Louisville Public Media
Listen Now

David Byrd lives in a little town called Sulphur, Kentucky. His yard sits next to some busy train tracks and it’s covered with a small mountain of coal. Byrd is one of the few people left who sell coal for household uses like heating. He gets it from Eastern Kentucky, and after working with coal for his whole life, he can tell the quality of each piece by feel.

“See how flaky that is?” Byrd said as he demonstrated with a piece of coal from his pile that he said was “kind of trash.”

One ton of coal from central Appalachia — about the amount that could go in the bed of a pickup truck — cost about $60 just a year ago. But now? The price has skyrocketed, going for around $130 a ton.

“So right now we got a coal boom going,” Byrd said.

Byrd is trying to keep prices low for his longtime customers. He’s watching train cars full of coal go by his house, as suppliers send coal to power plants that blew through their stockpiles last fall when the price of natural gas went up.

“If you don’t have the ability to rely on natural gas, particularly if it’s being supplied from Russia, they’re going to have to ramp up some of these coal fire units,” Wolf said. “So that’s why you’re seeing this very rapid increase in coal prices literally across the globe.”

Wolf says it’s not just the Russian invasion in Ukraine though. China, by far the largest coal consumer in the world, stopped buying coal from Australia back in 2020. That’s after the Aussies pushed for an investigation into China’s handling of COVID-19 early in the pandemic.

“It’s probably an unprecedented situation,” Wolf said. “I hate to use that word ‘unprecedented,’ but it kind of sums things up right now.”

Despite the high demand and lucrative prices, U.S. coal companies may not be well-positioned to take advantage of the boom in demand for coal.

Erin Bates, communications director at United Mine Workers of America, said a lot of that has to do with a shortage of labor.

“There’s just not that many experienced miners out there that are wanting to come back to coal after they’ve been laid off the last couple of years,” Bates said. “So it’s kind of an interesting dynamic.”

Bates says the bottom line is that many would-be miners don’t see a future in the job as utilities continue to move toward renewable energy.