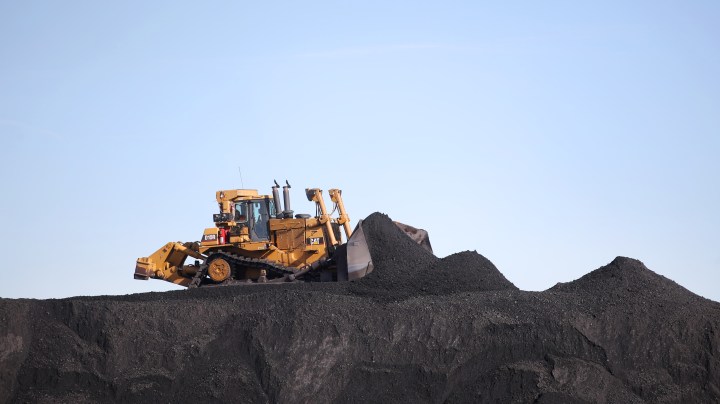 COPY
A labor shortage is, in part, limiting a ramp up in coal production. George Frey/AFP via Getty Images

A labor shortage is, in part, limiting a ramp up in coal production. George Frey/AFP via Getty Images
Listen Now

For all the talk of an energy transition, this economy still uses tons of fossil fuels, and it’s not just oil and natural gas.

Coal stockpiles at power plants are now at their lowest point since the 1970s, while coal prices are at their highest levels in more than a decade.

Coal producers are trying to ramp up production as quickly as they can, but it’s not as simple as just flipping a switch. Years of cheap natural gas coupled recently with cheaper wind and solar production has rendered coal the odd fossil fuel out.

Even when prices spike as they’re doing now, investors just aren’t that excited about spending on coal, said Seth Feaster at the Institute for Energy Economics and Financial Analysis.

“Coal producers are reluctant in many ways to ramp up production because doing that is capital intensive, takes a lot of money to really boost production,” he said.

Recent higher than normal natural gas prices are boosting coal demand, but who knows how long that will last?

If these high coal prices last even a little bit longer, though, private equity firms might come calling, according to Ian Lange, director of the mineral energy economics program at the Colorado School of Mines.

“Eventually someone’s gonna say, ‘Look, there’s money to be made here,’ right? Like: ‘You people are selling out their 2022 production. So, you know, let’s jump in,’” Lange said.

Another issue limiting a ramp up of coal production in the United States, he said, is that this industry is having the same labor shortages many other sectors are feeling right now. Plus, the long-term prospects of a life in the coal mines simply aren’t appealing for many young people.

Some in rural coal communities see this as a way to redefine their towns, said Sanya Carley, a professor of public and environmental affairs at Indiana University.

“I think that some younger generations see this as an opportunity to be a part of future change,” she said.

But Carley said communities need to think more broadly than jobs in wind and solar to make up for coal.