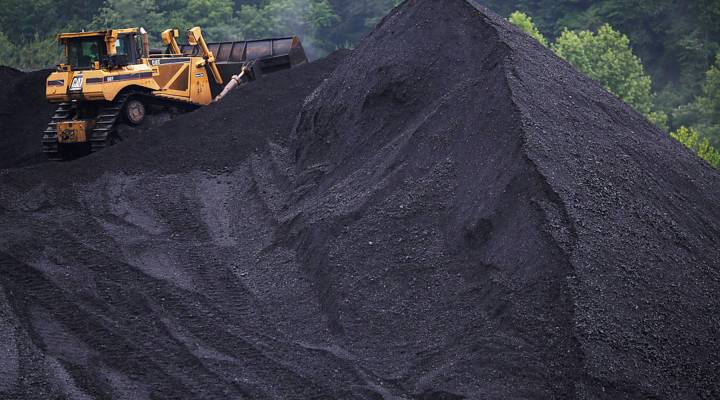 COPY
A bulldozer operates atop a coal mound in Kentucky. Luke Sharrett/Getty Images

In the coalfields of western Kentucky, when miners tell you their story, it’s not so much about digging for coal as excavating the past. Many grandfathers in these parts came to America to work in the mines.

“In the Lanham family, it started in 1919,” said Tony Lanham, CEO of Western Kentucky Minerals, which owns a mine in Knottsville, Kentucky. “I can’t remember a time that it wasn’t a coalmine where we’re standing here today.”

Here, the story is of a one-time Kentucky energy superhero that powered railroads and steamships, and provided the heat to make steel during the Industrial Revolution. To many, it is also a narrative of destiny and God.

“Coal has been a blessing,” mine superintendent Greg Wettstain said. “It’s been a blessing for several communities across this country. It’s definitely been put here for us to use, efficiently and wisely. I believe that firmly — along with gas and wind and water.

But the gift may not be forever. Coal production in the United States has fallen eight years straight to its lowest level in nearly four decades, according to the federal Energy Information Agency.

“We don’t actually think it’ll ever come back as strong as it was,” Wettstain said. “We just are hoping and praying it’ll come back strong enough.”

That’s the pragmatic view here, of coal simply holding on, as Americans defect to other energy sources. But the future is a matter of debate; optimists speak of a big comeback, citing rhetoric from politicians, including President Donald Trump. But former Kentucky miner Gary Bentley argued some of the hope is manufactured by politicians and coal executives who fly in from far away.

“They talk about fighting the war on coal, bringing coal jobs back,” Bentley said. “It gives these people that false hope. And they’re so desperate, it’s easy to grab onto that.”

They grab onto it even as Kentucky coal jobs have fallen to their lowest level in a 118 years, according to the Kentucky Energy and Environment Cabinet.

At the Western Kentucky Minerals mine, a surface mine, the key is to locate what’s called the coal seam. It’s a bit of an energy treasure hunt: Tony Lanham’s men drill, look down, find the coal and blast it with dynamite to break it up.

“If the Lord asked me ‘Where would you want it? I’m going to put it there?” it’s in a perfect place,” Lanham said. “Because we can shoot in it, on top of it, or under it, and bust it up.”

Not all coal is the same. The way Lanham talks about differences in quality and purity, it’s as if he’s talking about diamonds.

“The deeper you go in this area, the better quality of coal,” Lanham said. “And that’s because so much pressure has squeezed it down. All the impurities are pretty much out of it. That seam of coal right there, the old timers would love that. Oh, my Lord, they’d have died for it right there.”

The best coal can sell for $300 a ton, the cheapest perhaps $10. The different coals are fed into hoppers that churn the pieces and break them up. Some are washed, some are blended with others, and then it’s off to market.

That is, if it doesn’t rain. Water makes trucks slip and slide, and it makes mushy coal that doesn’t burn.

“One of our biggest issues would be the weather,” Lanham said. “We really enjoy the summertime. We just about get away with murder, so to speak.”

But there are bigger problems — starting with regulation. For all the benefits of coal, the government three decades ago began addressing the costs. Burning coal creates several different types of pollution.

“They have come in here and changed the laws,” Lanham said. “They caused the power plants to add on the equipment to capture the mercury, the chlorine, the arsenic.”

Not to mention carbon dioxide pollution. Those federal rules haven’t even kicked in yet, and they likely will not under Trump.

“It’s going to control our prices down the road,” Lanham said. “There’s no doubt about it.”

There’s no guarantee coal will fade. With energy, prices are volatile, and a big innovation could change everything. Researchers are trying to make natural gas from coal and capture the dirty emissions.

Still, Lanham is hedging, just in case. He’s part owner of a river terminal on the Ohio River, where coal and other commodities are loaded onto river barges. The revenue offsets some of the coal challenges. Lanham’s biggest customer — the local power plant — may shut down in five years.

“It’s a shame, because there’s been so much money and time spent on this modern-day technology,” Lanham said. “And it’s a shame that all at once you throw it away. It’s been our salvation for years and years and years.”

So he’s diversifying into what may be his next act, in case coal doesn’t have one.