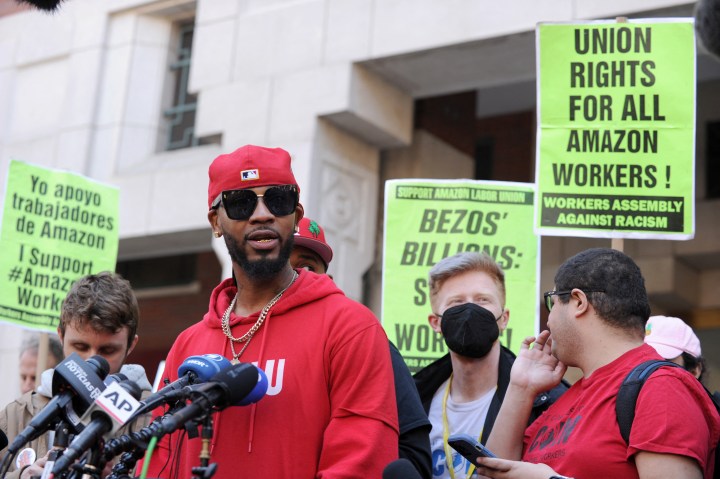 Amazon workers in Staten Island, New York, voted to unionize on Friday, marking the first successful U.S. organizing effort in the retail giant’s history and handing an unexpected win to a nascent group that fueled the union drive.

Warehouse workers cast 2,654 votes — or about 55% — in favor of a union, giving the fledgling Amazon Labor Union enough support to pull off a victory. According to the National Labor Relations Board, which is overseeing the process, 2,131 workers — or 45% — rejected the union bid.

The 67 ballots that were challenged by either Amazon or the ALU were not enough to sway the outcome. Federal labor officials said the results of the count won’t be verified until they process any objections — due by April 8 — that both parties may file.

The victory was an uphill battle for the independent group, made up of former and current workers who lacked official backing from an established union and were out-gunned by the deep-pocketed retail giant. Despite obstacles, organizers believed their grassroots approach was more relatable to workers and could help them overcome where established unions have failed in the past. They were right.

Chris Smalls, a fired Amazon employee who has been leading the ALU in its fight on Staten Island, bounded out of the NLRB building in Brooklyn on Friday with other union organizers, pumping their fists and jumping, chanting “ALU.” They uncorked a bottle of Champagne, and Smalls hailed the victory as a call to arms for other Amazon workers across the sprawling company.

“I hope that everybody’s paying attention now because a lot of people doubted us,” he said.

Smalls hopes the success in New York will embolden workers at other facilities to launch their own organizing campaigns. Even his group will soon shift their attention to a neighboring Amazon warehouse on Staten Island, where a separate union election is scheduled to be held in late April. Organizers believe Friday’s win is going to make it easier for them to win there, too.

Amazon posted a statement on its company website Friday saying that it was evaluating its options following the election.

“We’re disappointed with the outcome of the election in Staten Island because we believe having a direct relationship with the company is best for our employees,” the post said. “We’re evaluating our options, including filing objections based on the inappropriate and undue influence by the NLRB that we and others (including the National Retail Federation and U.S. Chamber of Commerce) witnessed in this election.”

The company did not elaborate but it signaled it might challenge the election based on a lawsuit filed in March by the NLRB, which sought to force Amazon to reinstate a fired employee who was involved in the union drive.

Amazon has long argued that workers don’t need a union because the company already provides good wages as well as benefits such as health care, 401(k) plans and a prepaid college tuition program to help grow workers’ careers.

The successful union effort on Staten Island stood in contrast to the one launched in Bessemer, Alabama by the more established Retail, Wholesale and Department Store Union. Workers at an Amazon warehouse there appeared to have rejected a union bid but outstanding challenged ballots could change the outcome. The votes were 993-to-875 against the union. A hearing to review 416 challenged ballots is expected to begin in the next few days.

The union campaigns come at a time of widespread labor unrest at many corporations. Workers at more than 140 Starbucks locations around the country, for instance, have requested union elections and several of them have already been successful.

But Amazon has long been considered a top prize for the labor movement given the company’s massive size and impact.

“We are clearly in a different moment after two years of the pandemic. Something has changed in the labor landscape,” said John Logan, director of labor and employment studies at San Francisco State University. “It is a potential tipping point. We knew that unions were having a moment, but this is much bigger. There is no bigger prize than organizing Amazon.”

Logan said he didn’t believe either union — the national or the independent labor group — would stand a chance with Amazon but he’s even more shocked that a small union would be victorious given its limited resources. The group had also filed for a union election after getting support from about 30% of the facility’s workforce, a much lower percentage than what unions usually seek.

But the group might still have a fight ahead of it, according to Erin Hatton, a sociology professor at the University of Buffalo in New York.

Amazon has pushed back hard in the lead-up to both elections in Staten Island and Bessemer. The retail giant held mandatory meetings, where workers were told unions are a bad idea. The company also launched an anti-union website targeting workers and placed English and Spanish posters across the Staten Island facility urging them to reject the union. In Bessemer, Amazon has made some changes to but still kept a controversial U.S. Postal Service mailbox that was key in the NLRB’s decision to invalidate last year’s vote.

Both labor fights faced unique challenges. Alabama, for instance, is a right-to-work state that prohibits a company and a union from signing a contract that requires workers to pay dues to the union that represents them.

The union landscape in Alabama is also starkly different from New York. Last year, union members accounted for 22.2% of wage and salary workers in New York, ranked only behind Hawaii, according to the U.S. Bureau of Labor Statistics. That’s more than double the national average of 10.3%. In Alabama, it’s 5.9%.

The mostly Black workforce at the Amazon facility, which opened in 2020, mirrors the Bessemer population of more than 70% Black residents, according to the latest U.S. Census data.

Pro-union workers say they want better working conditions, longer breaks and higher wages. Regular full-time employees at the Bessemer facility earn at least $15.80 an hour, higher than the estimated $14.55 per hour on average in the city. That figure is based on an analysis of the U.S. Census Bureau’s annual median household income for Bessemer of $30,284, which could include more than one worker.

The ALU said they don’t have a demographic breakdown of the warehouse workers on Staten Island and Amazon declined to provide the information to The Associated Press, citing the union vote. Internal records leaked to The New York Times from 2019 showed more than 60% of the hourly associates at the facility were Black or Latino, while most of managers were white or Asian.

Amazon workers there are seeking longer breaks, paid time off for injured employees and an hourly wage of $30, up from a minimum of just over $18 per hour offered by the company. The estimated average wage for the borough is $41 per hour, according to a similar U.S. Census Bureau analysis of Staten Island’s $85,381 median household income.