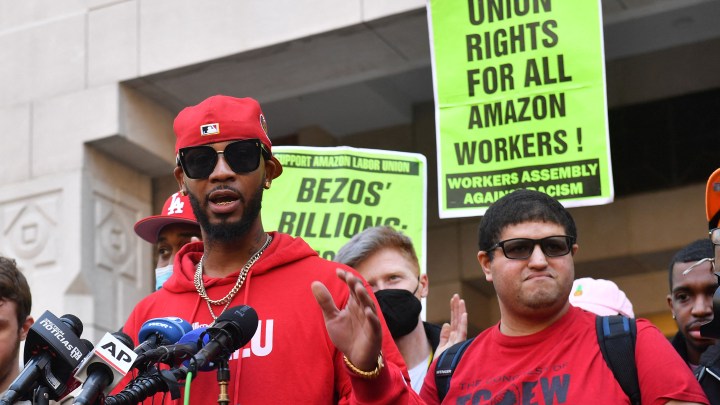 Workers at an Amazon warehouse in Staten Island voted to unionize on Friday, the first successful union drive at the second-largest private employer in the U.S. Amazon invested heavily in its effort to stop this from happening, but there is much work to do before workers are paid under a union-negotiated contract.

“Marketplace Morning Report” host David Brancaccio spoke with Adam Seth Litwin, a professor of industrial and labor relations at Cornell University. The following is an edited transcript of their conversation.

David Brancaccio: Looking at Staten Island, flash in the pan? A one-off? What do you think?

Adam Seth Litwin: Well, on the one hand, it’s just another data point that shows workers are actually gaining some real power. We’ve seen walkouts from health care workers and teachers, service workers. And we’ve seen successful strikes at Volvo and John Deere and Kellogg’s. But at the same time, labor organizers hope — and I think employers really fear — that what happened on Staten Island was just the camel’s nose under the tent. And I think that it may well be. So headlines like Staten Island from last week, I think they promote unionization in a way that no celebrity and no politician really can. JFK 8, that [Amazon] plant where they had the vote, it has over 8,000 workers, it serves as a central node for East Coast distribution. So the Amazon labor union, they didn’t shoot the beast’s forearm. They hit it squarely between the eyes.

Brancaccio: Yeah and Amazon worked to stop this. I mean, it invested, I think one estimate, about $4 million in getting consultants to see if they could get the workers to see it differently.

Litwin: And that’s what’s so amazing is that they managed against the odds to really make this happen. I mean, since the pandemic, we’ve seen lots of evidence that workers are finally securing a larger slice of the pie than they’ve been able to secure in a long time. But here’s the thing: Without collective bargaining, all of these gains that have been afforded by economic conditions, they’re going to evaporate even more quickly than they materialized. So if unions can actually manage to organize during this period, then workers can actually protect, hold on to and maybe even build on all the gains that they’ve been able to make right now.

Brancaccio: You’ve seen that one of the features of the Amazon workforce in these warehouses is a very high turnover rate. Does that make it even more surprising to you that this particular union in this warehouse was able to get this result?

Litwin: So now that they’ve been able to certify, in some sense, the real fun begins. Because about half of successful union certifications never reach a first contract, despite the fact that labor’s really trying. What employers typically do is they try to delay for about a year, and then they try to seek union decertification. And the reason they’re able to do that in a case like this is because turnover is so high. Most of these workers will not have even been there when the union was able to secure this vote. And so Amazon can look at them and say, “Hey, listen, you’ve had a union for a whole year and they’ve done nothing for you.” That’s going to be the real the real challenge moving forward.

Brancaccio: You’ve heard the song “New York, New York.” “If you can make it here, you can make it anywhere.” To some extent, is what happened on Staten Island a special case?

Litwin: Yeah, I think it is. It shows that grassroots local organizing efforts, I think, have a real advantage over the more conventional top-down approach that we typically see. The Amazon Labor Union, they understood local issues at work and in people’s lives. They knew how to speak to workers. And I think by doing that, they really robbed Amazon of one of its best anti-union arguments: The idea that these carpetbaggers don’t know you, they don’t know us and they’ve come from far away just to collect your union dues.