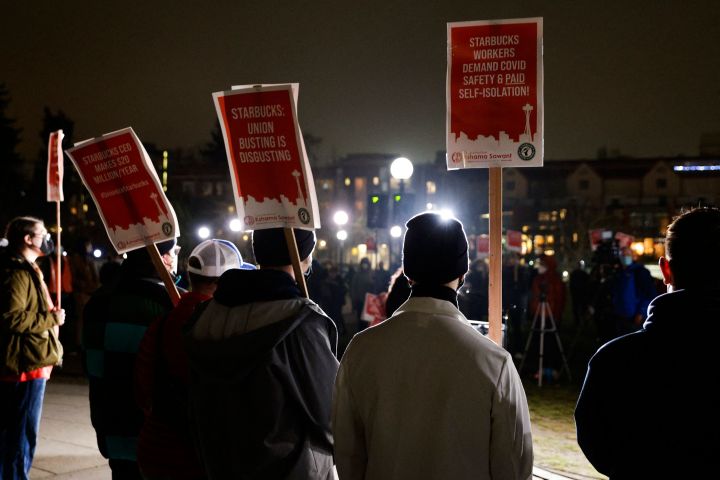 COPY
Just 10.3% of Americans belonged to unions in 2021, and the rate for private-sector employees was 6.1%. Jason Redmond/AFP/Getty Images

Just 10.3% of Americans belonged to unions in 2021, and the rate for private-sector employees was 6.1%. Jason Redmond/AFP/Getty Images
Listen Now

The last year has seen a wave of union activity at U.S. workplaces, from strikes at John Deere and Kellogg’s to a historic union drive among Starbucks workers in Buffalo, New York — and it comes at a time that more and more Americans are quitting their jobs and many employers are scrambling to hire. To some, it’s a sign that the balance of labor power is finally swinging back into workers’ favor after decades of wage stagnation and declining union membership.

But despite several recent high-profile union campaigns, union membership remains quite low across the country. Union membership declined in 2021, returning to the record-low rate of 10.3% first set in 2019. And the rate for private-sector employees dipped to just 6.1% — more than five times lower than in the public sector.

In part, that may be due to the obstacles American workers face in forming unions, according to Charlotte Howard, U.S. business editor for The Economist.

“American labor laws just make it really difficult to get from the stage of being excited about unionization to actually forming a union,” Howard said in an interview with Marketplace’s David Brancaccio.

“You do see these real pockets of [union] activity and a lot of support, particularly among younger progressives. But the question is whether this will go from something that’s happening on a relatively small scale to something bigger.”

David Brancaccio:  If you look across countries, not just within the United States, the laws here make it relatively challenging to form a union.

Charlotte Howard: That’s right. So that’s why I’m actually skeptical — despite all this activity — I’m skeptical that you’re going to see a big change. American labor laws just make it really difficult to get from the stage of being excited about unionization to actually forming a union. And you really see that in the data. There was data that was published in January that showed that in 2021, unionization was just 10.3%, which matches the record low of 2019. And even that is inflated because of unionization among government employees. If you look just at the private sector, union rates are down to about 6%.

Brancaccio:  But some unions have remained very powerful over the years — the United Auto Workers; the Service Employees Union has done a lot of hard work getting new members across the country.

Howard: Yeah, so you do see these pockets where there’s really a lot of activity and enthusiasm. Unions have been successful in moving away from manufacturing towards service workers. And you really see that in health care workers, in particular; you also see Starbucks workers thinking about unionization. And so you do see these real pockets of activity and a lot of support, particularly among younger progressives. But the question is whether this will go from something that’s happening on a relatively small scale to something bigger.

Brancaccio: You talked about public perceptions changing; becoming more favorable to the idea of unions and joining a union. What is that, in part?

Howard: I think that there is a sense among the electorate that company profits have been really high and median wages have stagnated — and so what do you do about that? And some people put forward unions as a solution. One of the most interesting things, I think, is that unions do have a really big role politically even if total unionization rates remain low. They’ve been very successful, for instance, in advancing higher minimum wage in states that are led by Democrats, even though there’s no action on the federal level for the minimum wage. So you see unions wielding their power in new ways. But I think that the most dramatic action in this labor market is going to come not through collective bargaining itself but through the individual actions of employers and workers.

Brancaccio:  — And workers drawing added clout from the fact that so many people are leaving and it’s hard to replace people?

Howard: Yeah, exactly. Employers are chasing workers rather than the other way around. And so they’re doing all kinds of different things. They’re recruiting workers in new ways. They’re saying that workers don’t need to have degrees that they once required. So it’s a really, really interesting time for that relationship between workers and business.