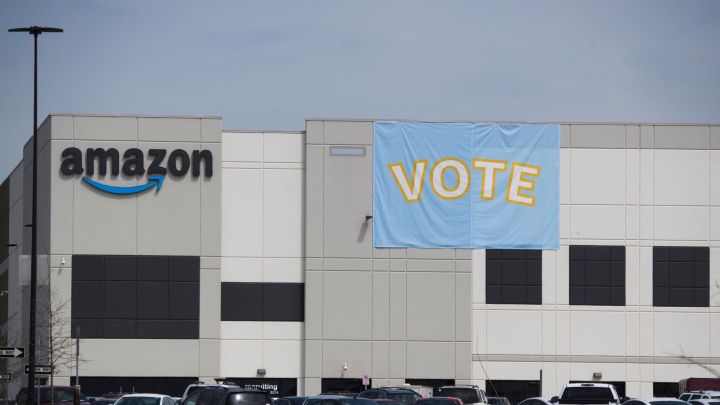 COPY
A sign encouraging workers to vote in the union election hangs outside the Amazon fulfillment center in Bessemer, Alabama. Patrick T. Fallon/AFP via Getty Images

Amazon employees at a warehouse in Bessemer, Alabama, voted against forming a union Friday.

For months, the Retail, Wholesale and Department Store Union has been trying to organize the approximately 5,800 Bessemer workers.

But, in the end, workers voted by a landslide, against unionizing.

It looked like the union could win. But the “no” vote was not a big surprise to Todd Vachon at the Rutgers School of Management and Labor Relations. He said U.S. labor law benefits employers. “And it makes it very difficult to organize a union in the United States. There’s just so many obstacles in the way. And so many opportunities for an employer to instill fear in the workers, to disseminate misinformation.”

“You know, Amazon certainly from all accounts engaged in a campaign against the union and that there’s likely some elements that violate the national labor relations act in there,” said Celine McNicholas with the Economic Policy Institute.

The Retail, Wholesale and Department Store Union has said it will challenge the vote with the National Labor Relations Board.

David Madland, a senior fellow at the Center for American Progress, said the Bessemer vote is a blow to organized labor, “but I think it also really highlights the need for legal reforms to make it possible for workers who want to join a union to be able to do so.”

In a statement, Amazon says it did not intimidate workers and does not consider this a win: “Our employees made the choice to vote against joining a union.”