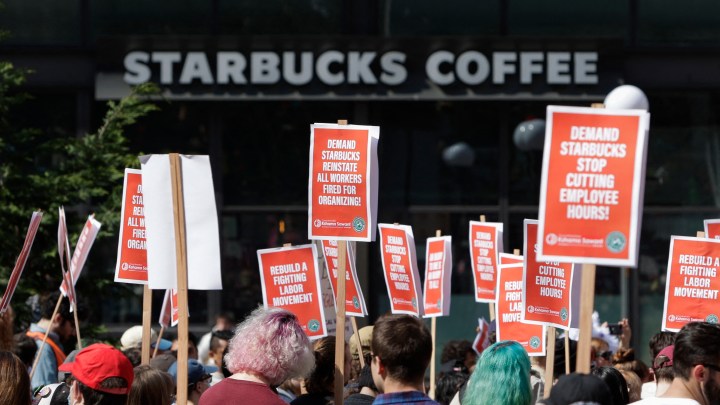 COPY
More than 16% of the union election petitions submitted to the government came from Starbucks. Jason Redmond/AFP via Getty Images
Workplace Culture

More than 16% of the union election petitions submitted to the government came from Starbucks. Jason Redmond/AFP via Getty Images
Listen Now

We’ve now got hard data to back up a trend we’ve talked a lot about on “Marketplace”: The number of workplaces trying to unionize is on the rise. The National Labor Relations Board reported that over the last nine months, it’s seen a 56% increase in petitions, the documentation workers file for a union election.

In fact, the number of petitions filed in the first three-quarters of this fiscal year — just shy of 2,000 — is more than were filed during the entire previous fiscal year.

It certainly feels like there’s been a surge of union activity at big companies like Amazon, Starbucks and Apple, said Rebecca Givan, a professor of labor studies at Rutgers. But the number of workers unionizing is still pretty small.

“Some of what’s in this count is a large number of relatively small workplaces,” Givan said. “A Starbucks coffee shop with maybe 20 workers and an Amazon warehouse with 6,000 workers. Each of those is just one election.”

Of the petitions, 320 came from Starbucks — more than 16% of the recent tally. But Givan said the constant drumbeat of new union drives creates a certain perception. And perception matters.

Neha Cremin is a barista at a Starbucks in Oklahoma City that voted to unionize last month. “I don’t know, it’s just really inspiring just seeing store after store winning across the nation,” she said.

Cremin, who is 24, said many of her co-workers are also young, a group that has been a key part of recent union drives.

“I think a lot of us have felt hopeless about the future, and I think for a lot of us unionizing was like a beacon of hope,” Cremin said. “You know, ‘Oh, we can do something. We can effect meaningful change.'”

Some recent campaigns unfolded in industries that are strongholds of organized labor, like health care. But many emerged in restaurants, retail chains and nonprofits, where unions aren’t as established, according to labor sociologist Ruth Milkman of the City University of New York.

“What a lot of these have in common is that college-educated demographic,” she said. “So I think it’s the combination of frustrated expectations … and then also the political worldview of this new generation.”

Of course, these efforts came together against the backdrop of historically low unemployment — which has given workers more leverage. It’s hard to say whether the enthusiasm will persist if we end up in a recession, Milkman added.