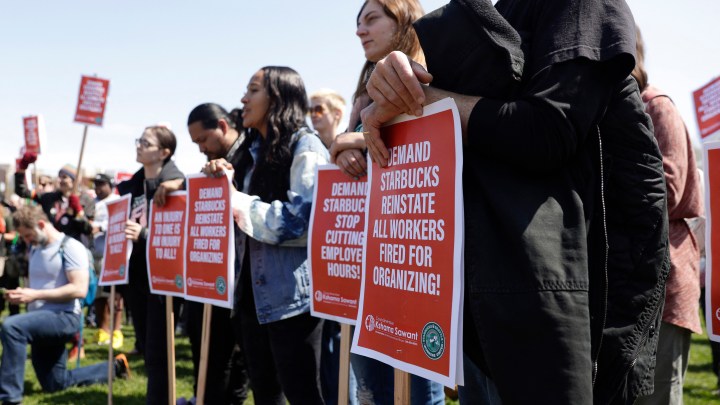 Workers at a Chipotle outlet in Lansing, Michigan, and an REI in Berkeley, California, voted to unionize this week. They’re the latest of hundreds of individual restaurant and retail stores that successfully organized this year.

More than 200 Starbucks have now unionized across the country as well as two Trader Joe’s and an Apple store. The shop-by-shop approach creates a constant drumbeat of union activity, though each of these drives involves a relatively small number of workers: about a dozen at the Lansing Chipotle and about 100 at the Berkeley REI.

That’s in contrast to the U.S. labor movement in the 1930s and ’40s, when unions accrued millions of members by organizing big industrial workplaces like factories and auto plants.

Tobias Higbie, a labor historian at the University of California, Los Angeles, said that was a different time. The economy was based more around manufacturing, and public policy was friendlier to unions.

“Labor law in the last 40 years has really gone the other way,” Higbie said.

The 1935 National Labor Relations Act made it the official position of the federal government to encourage collective bargaining, but Higbie said the law and its enforcement have been weakened over time, giving employers more power to hold off unions.

That can make smaller-scale organizing advantageous, he added.

“It’s simply easier to do,” he said, involving far fewer logistical challenges. Workers can even undertake organizing small workplaces on their own, without the resources of a powerful union. It’s also harder for employers to influence smaller groups, according to professor Sharon Block, executive director of the Labor and Worklife Program at Harvard Law School.

Employers generally have greater access to workers to make their case against unions, such as by requiring employees to sit through information sessions — often referred to as captive audience meetings — or by sending out all-staff emails.

“Probably a big piece is the rapid response,” she said. “The workers can check in with each other, can correct misinformation, can provide fuller context to information that the employer puts out.”

“If you’re in a smaller setting you probably know your boss, and it’s not as intimidating to stand up and speak out and challenge the messages that come across,” she said.

At the Trader Joe’s store in Minneapolis that voted to unionize this month, organizer Sarah Beth Ryther said the close relationships among the team of about 70 made it easier to build consensus before the company responded.

“We talk to each other all the time, and we share information,” Ryther said. “We had already had five to seven conversations with every single person on what to expect.”

She said they also learned lessons from staff at a store in Massachusetts, which organized the previous month.

But organizing on this small scale could limit how durable the movement is as the economy slows down, said Michael Strain, a labor economist at the American Enterprise Institute.

“I would not be surprised if we see an uptick in the share of the workforce that is unionized,” Strain said, “but I don’t think we are in for a period of sustained gains that will last for many years.”

He said that in the sectors seeing small unions proliferate — retail and restaurants — workers’ leverage may be only temporary, based on pandemic-related staffing shortages. If consumer demand shifts in a weaker economy, Strain said, that leverage could greatly diminish.