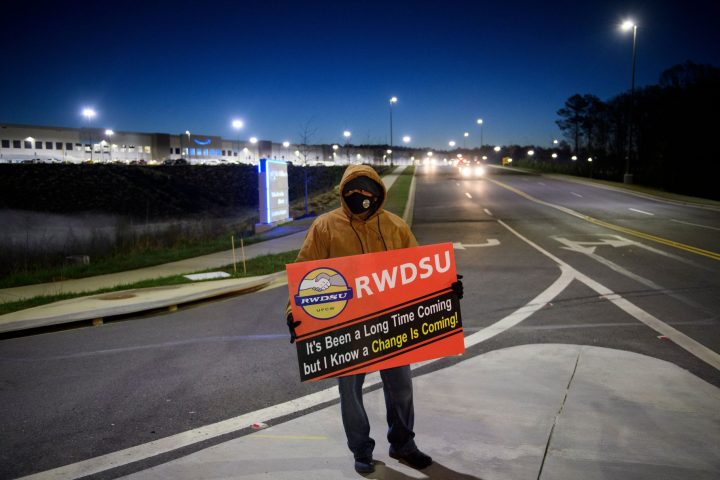 COPY
A union supporter stands before sunrise outside the Amazon fulfillment center on March 29 in Bessemer, Alabama. PATRICK T. FALLON/AFP via Getty Images

Organizers of an effort to unionize an Amazon warehouse in Bessemer, Alabama, filed a complaint with the National Labor Relations Board this week, challenging the company’s right to require employees to attend anti-union presentations at work, a common tactic that is currently considered legal.

These so-called “captive audience” meetings are usually held at workplaces during work hours, where employers make their case.

Chelsea Cruea, a shift supervisor at a Cleveland Starbucks, was called into one last week. “It’s basically the management’s perspective of what a union is,” she said.

Cruea’s store, along with other Starbucks stores across the country, is petitioning to unionize.

Last Tuesday and Wednesday, management shut down her store for a couple of hours early to hold meetings. Cruea said managers talked up Starbucks’ benefits and tried to cast doubt on what paying union dues would achieve.

“T​​he biggest thing they’ve been pushing is we won’t be a family anymore, you know, there will be somebody in between us and we don’t want our relationship to change,” she said.

This meeting was just with local managers, but at other stores, the company has brought in executives — including founder Howard Schultz. Often employers hire anti-union consultants to run the meetings said Kate Bronfenbrenner, director of labor education research at Cornell’s School of Industrial and Labor Relations.

“It’s a very uncomfortable, intimidating setting,” she said. “Workers feel that if they were to ask questions or challenge the employer, they could lose their jobs.”

Employment attorney Krista Mitzel said companies use these meetings to better understand the concerns of workers.

“They can then have the opportunity to really get to know what’s going on with the workforce, why they’re feeling this way, what needs are or are not being met.”

Unions, though, don’t really have that chance, because they don’t have access to workplaces, according to Tobias Higbie, a labor historian and associate director of the Institute for Research on Labor and Employment at UCLA.

“Typically, a union organizer is going to have to meet the employees outside of the workplace,” he said. “Often, they go to people’s homes. Sometimes they talk to people on the street corner outside, you know, hand out leaflets.”

Labor advocates have long argued unions should be offered equal time in workplaces to present their own information said Benjamin Sachs, co-director of the Labor and Worklife Program at Harvard Law School.

“It would also be a big deal symbolically, because it would symbolize that the union was not so much an outsider,” he said.

Officials are increasingly receptive to that argument, said Sachs. President Joe Biden campaigned on a pro-labor platform that included banning captive audience meetings. And the general counsel he appointed to the National Labor Relations Board has signaled she’ll be pursuing challenges, like the one filed by Amazon union organizers.