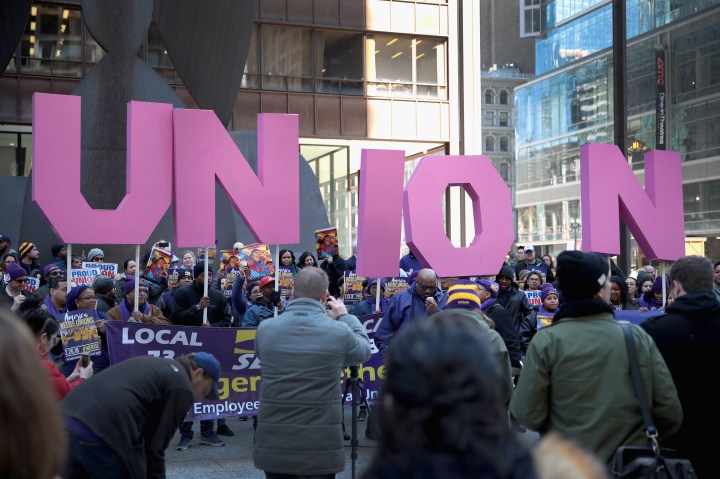 COPY
Research shows that workers of color benefit greatly from union membership when it comes to wages. Photo by Scott Olson/Getty Images

Research shows that workers of color benefit greatly from union membership when it comes to wages. Photo by Scott Olson/Getty Images
Listen Now

A recent study from the congressional joint Economic Committee found union members earn on average 10% more than their non-union peers. The difference is even greater for Black and Latino unionized workers, whose wages were 17% and 23% higher on average.

There’s almost always a power imbalance when it comes to negotiating with an employer, said Valerie Wilson at the Economic Policy Institute. And that imbalance is compounded for workers of color.

“They come with a higher likelihood of being unemployed in the first place, and lower income, lower wealth, so there’s more pressure to stay on a job or to take a job rather than to hold out or even to challenge something they think is unfair,” she said.

But she said collective bargaining helps level the playing field.

“It clearly lays out policies and practices and pay for a worker in a given position.”

Union membership has been declining for decades, but Black workers are more likely to be in a union than the population at large.

“Workers of color have been central participants in the labor movement for a really long time,” said Danielle Mahones, a trainer at the UC Berkeley Labor Center.

She points to recent organizing efforts like the one at the Staten Island Amazon warehouse, where Black workers have been at the forefront. But many Black and Latino workers live in states in the South and Southwest that limit the power of unions.