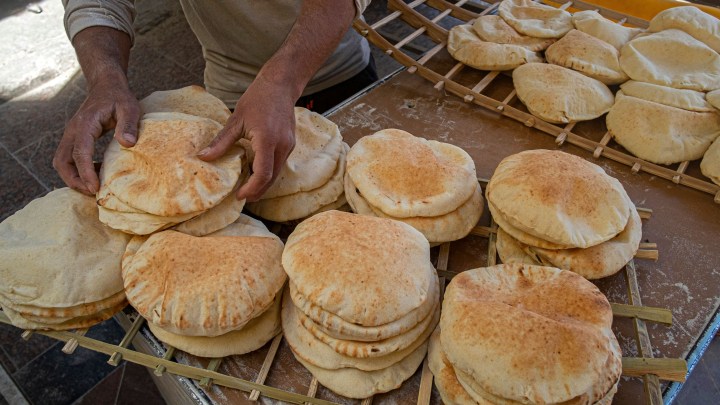 COPY
Egyptian men work in a bakery at a market in Cairo on March 17, 2022. Russia's invasion of Ukraine has caused wheat prices to soar — necessary for bread, an important food staple in the Middle East. Khaled Desouki/AFP via Getty Images

Egyptian men work in a bakery at a market in Cairo on March 17, 2022. Russia's invasion of Ukraine has caused wheat prices to soar — necessary for bread, an important food staple in the Middle East. Khaled Desouki/AFP via Getty Images
Listen Now

Russia’s invasion of Ukraine has been stressing worldwide wheat supplies — and sending the price of wheat soaring — to the highest since 2008.

In wealthier countries, that’s merely inconvenient, another factor in overall inflation. But in Egypt, Lebanon and other developing countries, rising bread prices could turn into a catastrophe.

Food is a big part of people’s budgets in the Middle East because so many people live in poverty there. That’s why bread is such a staple, said Mirette Mabrouk, a senior fellow at the Middle East Institute.

“When you can’t afford other things, you will be able to afford the bread. So you take away that staple, and life becomes very, very difficult.”

That’s what happened in 1977, when the Egyptian government announced it would stop subsidizing bread and other food items.

“What they got was about two days of all-out chaos and rioting, and, not surprisingly, they walked the decision back,” Mabrouk said.

Uprisings over the price of bread haven’t just happened in Egypt.

“In Morocco in 1981, also 1984. Jordan — 1989 and 1996,” said Monica Marks, a professor of Middle East politics at NYU’s Abu Dhabi campus. “Moving on to Tunisia, there were huge bread riots in 1983-84. Hundreds of thousands of people demonstrated around the country, over a hundred were killed. And it led to a weakening of the ruling Bourguiba regime at the time.”

Marks said that paved the way for former Tunisian President Zine El Abidine Ben Ali to take power. He was deposed during the Arab Spring protests in 2011, which were, in part, fueled by bread prices.

These events have shaped the politics of the region, Marks said. “We saw in a number of countries, autocratic leaders becoming more afraid of lowering food subsidies. We saw a number of examples during the 1980s of autocrats tightening up security policy, becoming more restrictive in how they repress dissent.”

Now that wheat prices are rising again, protests have broken out in Iraq and Sudan. Yemen, Syria and Lebanon are particularly vulnerable, according to Omer Karasapan, an analyst who spent over 30 years at the World Bank.

“I mean Lebanon, for example, has only a month’s worth of grain stocks because their grain storage terminal blew up during that famous explosion in the Lebanese port,” he said.

If the war keeps the price of wheat high, Karasapan said the Middle East will have a food problem next year as well.