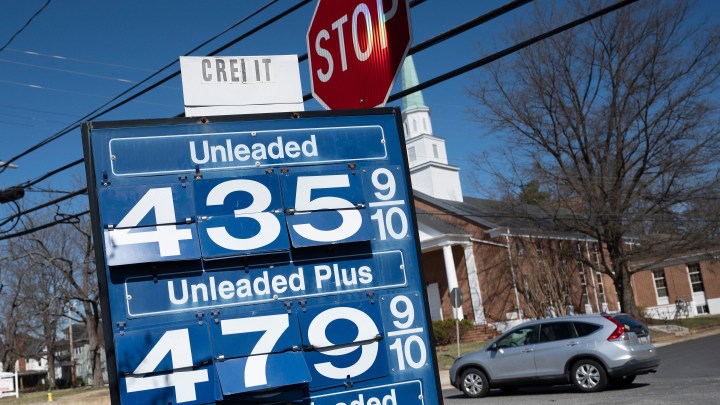 COPY
Though the cost of a barrel of oil has dipped back below $100, consumers aren't feeling much relief at the gas pump yet. Jim Watson/AFP via Getty Images

Though the cost of a barrel of oil has dipped back below $100, consumers aren't feeling much relief at the gas pump yet. Jim Watson/AFP via Getty Images
Listen Now

Filling up your tank isn’t cheap right now. Just last week, a barrel of crude topped $130. Since then, the price has dipped below $100, falling off a cliff (to use the technical term) and into correction territory.

Ask any driver about gasoline prices right now and you’ll probably hear a version of this: “Way too expensive. Not worth it,” said college student Sam Appleyard, who was filling up at a Shell station in Houghton, Michigan. “I hope they go down soon.”

She just skipped spring break with family because gas prices were so high. “I’ve been actually, like, trying to wait it out because I’ve been hoping that they would eventually go down, but they haven’t yet.”

That might change — and soon — as oil prices keep falling, according to Tom Kloza, global head of energy analysis at OPIS.

The price drop and its pace are due in part to recent COVID-19 restrictions in China, Kloza said. “They are the fastest-growing consumer of refined products and crude in the world.”

“When you don’t know whether you can buy oil next week or next month or in three months, you try to lock in your supplies to reduce your risk,” he said.

Seeing that reflected as cheaper gas will take time, though, said Kelly Sanders, an associate professor at the University of Southern California.

“The gasoline that we pump today actually reflects the price of crude that refineries purchased weeks ago.”

Sanders is also hoping relief comes soon. “I can tell you, here in Los Angeles, we’re not seeing it yet.”

She said gasoline prices follow oil a lot more quickly on the way up than on the way down.