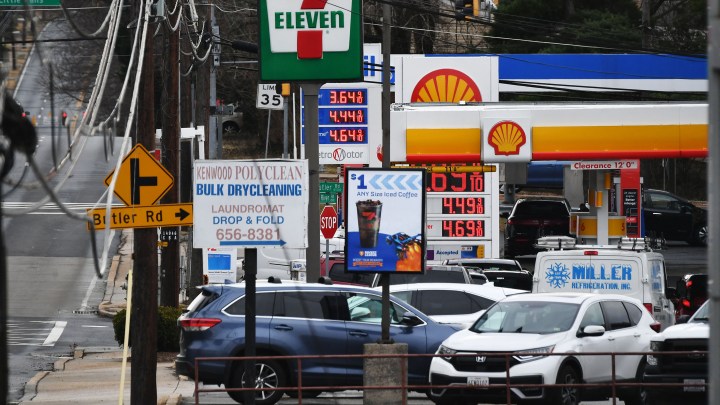 COPY
Gasoline prices have surged along with the price of crude oil. The war in Ukraine has raised the possibility of a ban on imports from Russia, which could squeeze the global supply. Mandel Ngan/AFP via Getty Images

Gasoline prices have surged along with the price of crude oil. The war in Ukraine has raised the possibility of a ban on imports from Russia, which could squeeze the global supply. Mandel Ngan/AFP via Getty Images
Listen Now

If you drove anywhere over the weekend, you probably know that gasoline prices are a little crazy. The national average is at $4.06 a gallon, according to AAA. That’s up 12% from a week ago.

This comes as Secretary of State Antony Blinken confirmed that the U.S. and its allies in Europe are thinking about banning imports of Russian oil.

Thing is, we don’t really rely all that much on Russian oil here in the U.S. So what gives?

Gasoline prices reflect a lot of factors: supply and demand, state and local taxes, transportation costs for moving gas around.

“But the main contributing factor to the price of gasoline is the price of crude oil,” said Devin Gladden, AAA’s manager for federal affairs.

Crude oil prices make up around 55% of what we pay for gas, he said. Those crude prices are rising because oil traders are getting nervous about a possible ban on Russian oil exports.

“We haven’t seen official bans out there, but if you’re a trader, you have to believe that something is going to happen,” said Tom Seng, director of the School of Energy Economics, Policy and Commerce at the University of Tulsa.

Sanctions on Russian oil would likely cause oil prices to rise in the future. As a result, Seng said, traders are buying oil now — which pushes prices up today.

“The concern that prices could run up is sort of a self-fulfilling prophecy at this point in time,” Seng said.

Those higher crude prices mean refineries have to spend more on the crude oil they turn into gasoline, according to Bob McNally, president of Rapidan Energy Group.

“And the refiners have to pass that along to consumers, as the price of crude oil goes up,” he said.

It usually takes about three weeks for a jump in oil prices to show up at the pump, McNally added. That means gas is likely to get more expensive.

“You should start to see a roughly 10% to 15% increase in gasoline prices, assuming these crude oil prices stick,” he said.

But if they don’t and oil prices fall, we shouldn’t expect gasoline prices to drop as quickly as they’ve risen, said Severin Borenstein, a professor at the University of California, Berkeley.

That’s because people tend to pay more attention when oil prices are rising, Borenstein said. And when those prices go down?

“People just breathe a sigh of relief. They continue to go to their station they’ve been going to, they don’t shop around very much — that lowers the competitive pressure,” he said.

That also means gas stations can get away with charging higher prices for longer, Borenstein added.